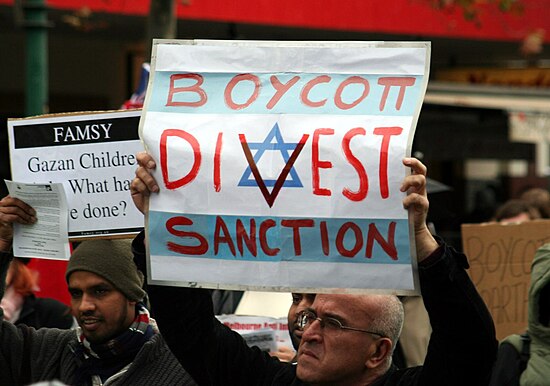 On July 23, the US House of Representatives passed (the vote went 398-17, with five voting "present") a resolution condemning the Boycott, Divestment and Sanctions (BDS) Movement.

The resolution was an outrageous condemnation of the freely chosen economic actions of millions of Americans.

Worse, that condemnation was made on the express behalf of not just a foreign government but the specific policies of one foreign political party (Israel's Likud Party and its leader, Israeli prime minister Benjamin Netanyahu). Its intended purpose is to give Likud and Netanyahu the advantage of perceived US support in Israel's upcoming election.

Worst of all, the resolution's proponents made -- and now that it's passed, will continue to make -- extensive use of overt, undisguised race-baiting, posturing as defenders of Jews while smearing their opponents as anti-Semites.

What are the purposes of the BDS movement?

To pressure the government of Israel to meet "its obligation to recognize the Palestinian people's inalienable right to self-determination and fully compl[y] with the precepts of international law by: 1. Ending its occupation and colonization of all Arab lands and dismantling the Wall; 2. Recognizing the fundamental rights of the Arab-Palestinian citizens of Israel to full equality; and 3. Respecting, protecting and promoting the rights of Palestinian refugees to return to their homes and properties as stipulated in UN resolution 194."

Yes, some BDS supporters oppose the existence of the Israeli state as such, and some of them are anti-Jewish bigots. Go figure.

Other BDS supporters are Jews, including some Israelis. Being Jewish or Israeli no more entails supporting one political party's agenda than being American does.

BDS harnesses the consciences of individuals -- individuals of all religions, nationalities, and ethnicities -- to voluntary action pressuring the Israeli government to abide by the same standards of international law that the US government routinely, and with great pomp and circumstance, imposes coercive sanctions on other governments for supposedly violating.

The anti-BDS resolution is a far more overt, and likely far more effective, instance of US government meddling in Israel's elections than anything the Mueller Report credibly accuses the Russian state of doing vis a vis the 2016 US election.

But not as disgusting as its supporters' virulent resort to racial politics and their abuse of Jews as, to steal a phrase from a recent New York Timesop-ed by Michelle Goldberg, "human shields" to distract our attention from what they're actually up to.

Shame on the House.

Related Topic(s): Bds Campaign, Add Tags
Add to My Group(s)
Go To Commenting
The views expressed herein are the sole responsibility of the author and do not necessarily reflect those of this website or its editors.