Where is the corporate media's disgust for the courtesans of corporate destruction that wreak violence on Americans daily? 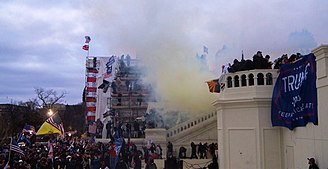 Most rational Americans have correctly criticized and denounced the violent insurrection in the Capitol last week. Those moments of attack by a racist, disgusting mob have not lacked for condemnation and denunciation. They were violent. They were reprehensible. They called for the killing of lawmakers, demanded the hanging of Congress members. The liberal media and even most of Fox News have not held their tongues when it comes to excoriating the morally bankrupt people who took part. And I agree with those thoughts.

BUT -- why don't we see an equal amount of disgust and condemnation for the violence done by our ruling class, the courtesans of corporate destruction?

Is allowing people to die or fall ill due to lead pipes in Flint, Chicago, Pittsburgh, and hundreds of other cities not violence?

Is allowing citizens to lose their lives to cancer from Teflon™ chemicals dumped in their water or preventable oil spills not violence?

Is allowing tens of thousands to die of preventable illnesses from our garbage healthcare system not violence?

Is allowing 15 million to lose their healthcare during a pandemic and therefore fear going to the hospital when they get sick not violence?

Is imprisoning millions of people for years for non-violent crimes not violence?

Is dropping a bomb every 12 minutes on innocent people in countries thousands of miles away not violence??

Is allowing millions in this country to go hungry while we throw out 40% of all food not violence?

Is arresting people who try to feed those who are starving not violence?

Is allowing hundreds of thousands to go homeless, living under bridges or on benches or squatting in collapsing structures while this country has trillions of dollars and millions of empty houses -- is that not violence?

Is arresting, beating, and persecuting those who try to give those people houses not violence? And bulldozing the homes is that not violence?

Lee Camp is an American stand-up comedian, writer, actor, and activist. He is the host of the weekly comedy news show Redacted Tonight with Lee Camp on RT America and he also hosts the Common Censored podcast with Eleanor (more...)

Related Topic(s): America Culture Of Violence; American Facism; American_History; Americans For Prosperity, Add Tags
Add to My Group(s)
Go To Commenting
The views expressed herein are the sole responsibility of the author and do not necessarily reflect those of this website or its editors.

Lee Camp: The Four Layers of Reality -- and Why We're Only Allowed to Talk About One

LEE CAMP: Nineteen Facts About American Policing That Will Blow Your Mind

LEE CAMP: Trump Will Win Reelection Unless We Do One Thing

LEE CAMP: The Life-Saving COVID-19 Drugs You've Never Heard Of (and Why)