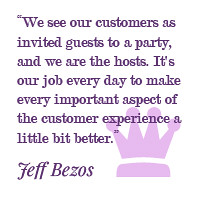 customer-centric
(Image by Sweet Dreamz Design)   Details   DMCA
is latest book (Mindless: Why Smarter Machines are Making Dumber Humans) Simon Head describes how large corporations such as Amazon are using computer-based monitoring systems that maximize efficiency by creating inhuman working conditions. Amazon is one of the most admired corporations in the world, and Jeff Bezos is rightly seen as an entrepreneurial genius.

Yet, says Head, Amazon "treats employees as untrustworthy human robots and relies on intimidation to push them to the limit." At the many Amazon warehouses ("fulfilment centers") scattered around the country, every aspect of workers' activity is measured and timed, and they are quickly terminated if they fail to meet constantly escalating quotas.

The work often results in painful long-term injuries, as in the case of Connie Milby, a 51-year old employed at Amazon's warehouse in Campbellsville, KY. According to a Seattle Times article in April of 2012 ("Amazon warehouse jobs push workers to physical limit"), Milby averaged 10 miles per day "walking and climbing up and down three flights of stairs" to retrieve merchandise ordered by Amazon.com customers. After ten years a chronic foot injury slowed her down. "'I was terminated for low productivity,' Milby said."

In a report for the International Business Times (12/19/13), Angelo Young describes the extreme production quotas at an Amazon fulfilment center in Pennsylvania as keeping workers "in a perpetual state of insecurity about their continued employment. If they give up or are fired, there's a legion of temp workers -- recruited by subcontracted labor recruiters who have offices inside the warehouse facility -- waiting to take their turn processing hundreds of packages per hour."

Amazon is the biggest player in a fast growing online retail industry that, according to Forrester Research , will reach $327 billion in 2016. At least Amazon offers health insurance and paid vacations to its regular warehouse employees (while they last). Most online retailers (such as Walmart) subcontract their warehouse operations, and the subcontractors use temporary workers from staffing agencies. The use of temps is growing in warehouses, distribution centers, the food-packing industry, and hotels.

Most temp workers don't get raises, paid vacations or health insurance. They are the epitome of "flexibility" in the labor market. Companies can order up the exact number of bodies they need on any given day, while workers know that if they aren't cheerful about poor pay and overwork, they may get nothing the next day.

There is a simple reason why people are willing to work under such abusive conditions. As individuals, especially in a time of high unemployment, they lack the power to stand up to management and the wealthy investors that own their workplaces.

The union movement that peaked in the mid-20 th century gave millions of workers strength in numbers, middle-class status and a sense of dignity as participants in the political life of their country. Even non-union firms had to treat their workers better to avoid unionization. But a combination of disunity in the ranks of labor, richly funded anti-union organizations such as the Chamber of Commerce and ALEC, and unrelenting hostility from the GOP (after 1980) has led to a near collapse of unionism.

In 2013 overall union membership was 11.3%. Private-sector membership was only 6.7%. Amazon and most of the online retail industry have succeeded in blocking union efforts to organize their workers. Without those unions, there is no countervailing power to fight for decent working conditions.

It is central to American political tradition to be very concerned about "checks and balances" in the functioning of government. We want the executive, legislative and judicial branches to oversee and limit each other so as to counteract abuses of power. For similar reasons our Constitution divides the legislative branch into two potential adversaries--the House and Senate. We are not a submissive people, we don't want to be pushed around by the government "We the People" have created.

Over 96 million of "We the People" are what the Bureau of Labor Statistics calls "production and nonsupervisory employees on private nonfarm payrolls." Without unions, these American workers get pushed around by the unchecked and unbalanced power of management and wealthy investors.

There are two things the United States has to get right in order to have a healthy capitalist democracy. One is the relationship between citizen and government, and the other is between labor and capital.

As the Preamble to the Constitution proclaims, Government is a means toward an end: the "Blessings of Liberty" and the "general Welfare" of "We the People." We reject the kind of government that treats its people simply as means or resources. The purest form of such treatment is slavery.

Similarly, capital (financial or physical) is a means that enables labor (us) to produce what "We the People" need. Abusive workplaces like Amazon and Walmart treat workers as commodities, as nothing but means to the growth of capital through profit. The decline of unions leads to wage slavery.

Related Topic(s): American Capitalism; Anti-union; Capitalism; Capitalism Over Humanity; Corporations; Democracy; Employees; Intimidation; Power; Work; (more...) Workers, Add Tags  (less...)
Add to My Group(s)
Go To Commenting
The views expressed herein are the sole responsibility of the author and do not necessarily reflect those of this website or its editors.