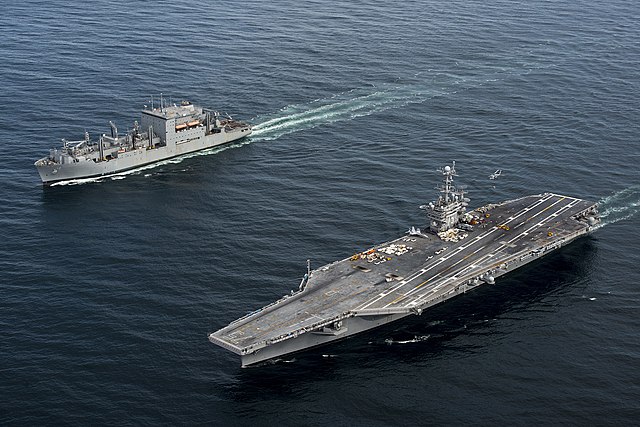 The US Department of Defense wants to retire an old aircraft carrier early while building two new ones (and adding other goodies to their shopping list).

Surprise, surprise politicians from states with the shipyards and naval bases that employ their constituents want to keep the old carrier AND build the new ones.

America and Americans would be better off if Congress retired the USS Harry S. Truman, nixed the DoD request for two new Ford-class carriers, and worked up plans for an orderly retirement of several more carriers too. The US Navy's surface warfare ship complement is too large, too expensive, and too "fighting previous wars"-oriented to serve any rational "defense" purpose.

The US Navy operates 20 of the world's 41 active aircraft carriers, including 11 flat-top "super-carriers," each Carrier Strike Group disposing of more firepower than most countries' entire militaries. There's precisely zero danger of the US falling into a flat-top "carrier gap," even if that was something to be avoided. And it isn't.

World War Two, in which carriers replaced battleships as the central factor in naval warfare, ended three quarters of a century ago. Carriers as such may not be entirely passe, but 1,000-foot "super-carriers" like the existing Nimitz-class and the forthcoming Ford-class are. If carriers have a future, it's in STOBAR ("Short Take-Off But Arrested Recovery") ships. They're smaller, cheaper, less vulnerable, and over the last 75 years aircraft have been developed that don't need a thousand feet of deck to take off from or land on.

The notional lifespan of a Nimitz-class aircraft carrier is 50 years, but none are quite that old. The USS Nimitz's keel was laid 50 years ago last June, but the ship wasn't finished, commissioned, and deployed until the mid-1970s ( it's undergone 19 reduced availability periods, including two "complex" overhauls, since then; it's in the middle of a state of "planned incremental availability" at the moment).

The reasons these old ships remain in service (and new ones designed on the same general concept are under construction) aren't defensive, or even military, in nature. They're about money. Money for "defense" contractors, money for the politicians they contribute to, and paychecks for the employees who vote for those politicians.

Unfortunately, once that money's spent and the ships and weapons make it into active service, the temptation to use them tends to overwhelm good sense, dragging America into non-defensive wars neither it nor the world around it needs.

The US government's "defense" budget is the single largest discretionary area of federal spending. It's an aging hippie in dire need of a clean shave and a buzz cut. There's no better place to start trimming than the US Navy's carriers and their supporting ships and infrastructure.

Related Topic(s): Aircraft Carrier; Budget; Defense Contracts; Dept Of Defense DOD; Navy, Add Tags
Add to My Group(s)
Go To Commenting
The views expressed herein are the sole responsibility of the author and do not necessarily reflect those of this website or its editors.