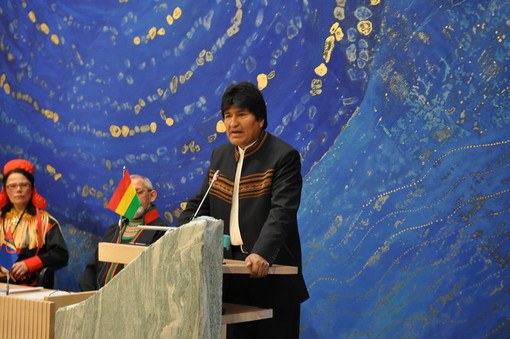 Bolivia's President Evo Morales was overthrown in a military coup on November 10. He is now in Mexico. Before he left office, Morales had been involved in a long project to bring economic and social democracy to his long-exploited country. It is important to recall that Bolivia has suffered a series of coups, often conducted by the military and the oligarchy on behalf of transnational mining companies. Initially, these were tin firms, but tin is no longer the main target in Bolivia. The main target is its massive deposits of lithium, crucial for the electric car.

Over the past 13 years, Morales has tried to build a different relationship between his country and its resources. He has not wanted the resources to benefit the transnational mining firms, but rather to benefit his own population. Part of that promise was met as Bolivia's poverty rate has declined, and as Bolivia's population was able to improve its social indicators. Nationalization of resources combined with the use of its income to fund social development has played a role. The attitude of the Morales government toward the transnational firms produced a harsh response from them, many of them taking Bolivia to court.

Over the course of the past few years, Bolivia has struggled to raise investment to develop the lithium reserves in a way that brings the wealth back into the country for its people. Morales' Vice President Álvaro García Linera had said that lithium is the "fuel that will feed the world." Bolivia was unable to make deals with Western transnational firms; it decided to partner with Chinese firms. This made the Morales government vulnerable. It had walked into the new Cold War between the West and China. The coup against Morales cannot be understood without a glance at this clash.

Clash With the Transnational Firms

When Evo Morales and the Movement for Socialism took power in 2006, the government immediately sought to undo decades of theft by transnational mining firms. Morales' government seized several of the mining operations of the most powerful firms, such as Glencore, Jindal Steel & Power, Anglo-Argentine Pan American Energy, and South American Silver (now TriMetals Mining). It sent a message that business as usual was not going to continue.

Related Topic(s): Bolivian Revolution; Canada; China; Coup; Lithium; Tesla, Add Tags
Add to My Group(s)
Go To Commenting
The views expressed herein are the sole responsibility of the author and do not necessarily reflect those of this website or its editors.