And colleague says "global warming" no longer strong enough term. "Global heating is technically more correct because we are talking about changes in the energy balance of the planet." 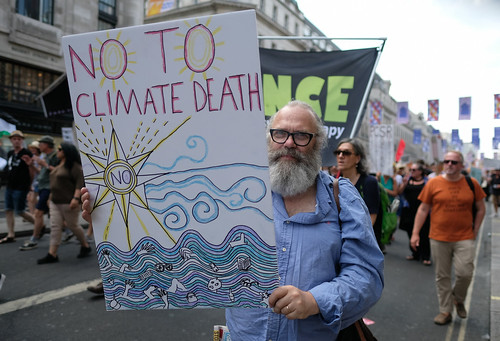 No To Climate Death!
(Image by alisdare1)   Details   DMCA

Declaring that after three decades of studying the climate he's "never been as worried" about the future of the planet as he is today, Hans Joachim Schellnhuber -- founding director of the Potsdam Institute for Climate Impact Research in Germany -- warned that even as extreme weather wreaks havoc across the globe and experts issue one terrifying prediction after another, political leaders are still refusing to confront the climate crisis with the necessary urgency.

"I've worked on this for 30 years and I've never been as worried as I am today," Schellnhuber declared during the COP24 climate summit in Poland, arguing that even the language commonly used to describe the changing state of the climate doesn't sufficiently convey the enormity of the crisis.

"Global warming doesn't capture the scale of destruction. Speaking of hothouse Earth is legitimate," added Schellnhuber, who co-authored a "terrifying" study warning that humanity may be just 1 degreesC away from irreversible planetary catastrophe.

Richard Betts, professor of climate impacts at the University of Exeter, agreed with Schellnhuber's dire assessment, and argued that "global heating" is more accurate than "global warming" in describing what continued carbon emissions are doing to the climate.

"Global heating is technically more correct because we are talking about changes in the energy balance of the planet," Betts said. "The risks are compounding all the time. It stands to reason that the sooner we can take action, the quicker we can rein them in."

But Betts went on to express dismay at the suicidally slow pace at which world leaders are working to confront the crisis that -- if immediate and bold action is not taken -- threatens to render the planet uninhabitable for future generations.

"Things are obviously proceeding very slowly," Betts said. "As a scientist, it's frustrating to see we're still at the point when temperatures are going up and emissions are going up. I've been in this for 25 years. I hoped we'd be beyond here by now."

As world leaders refuse to ditch fossil fuels or -- in the case of the Trump administration -- attempt to increase production, people around the world are mobilizing around ambitious solutions like a Green New Deal, which is rapidly gaining support in the U.S. Congress.

As Common Dreams reported, the "Extinction Rebellion" movement -- which is demanding that governments reduce carbon emissions to net zero by 2025 -- has spread to 35 countries in just six months.

commondreams.org is a progressive publisher
Related Topic(s): Climate Change; Climate Crisis; Future; Scientists, Add Tags
Add to My Group(s)
Go To Commenting
The views expressed herein are the sole responsibility of the author and do not necessarily reflect those of this website or its editors.