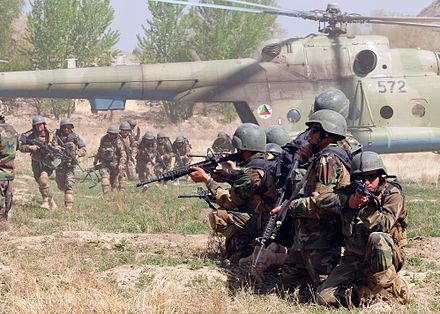 "In our country the lie has become not just a moral category but a pillar of the State."
Aleksandr Solzhenitsyn

Americans have been fed a steady stream of lies about the Afghan War, concluded the Post. So asserted this writer in "American Conservative" magazine in 2003 when the US invaded Afghanistan.

"We didn't have the foggiest notion of what we were undertaking," admitted three star General Douglas Lute who commanded US forces in Afghanistan under Presidents George Bush and Barack Obama.

Arrogance and ignorance, backed by mammoth brute force, led US policy in the remote Asian nation. Attacking Afghanistan was revenge for the 9/11 attacks against the US. As this writer saw first hand in Afghanistan, all the claims about Osama bin Laden's "terrorist training camps" in Afghanistan were lies. 9/11 was not planned in Afghanistan.

Taliban were not "terrorists." They were lightly armed tribal warriors fighting bandits and the US-backed Afghan intelligence services run by the Communist Party. Taliban's fathers, the mujahidin, were hailed as "freedom fighters" by Ronald Reagan. In 2003, the US did a total volte-face to support the Afghan Communists who promised to allow US-owned pipeline routes south from Central Asia's oil rich Caspian Basin to Pakistan's coast. After Taliban refused the chintzy US pipelines offer, this nationalist, anti-drug movement that battled the rape of Afghanistan was branded "terrorists."

The US-installed Kabul regime was a bunch of off-the-shelf CIA assets: warlords, major drug dealers, and communists. Billions upon billions of US dollars were flown in to hire mercenaries and pay off warlords and criminals. The biggest war criminals in Afghanistan became key US allies.

When Taliban was in power, it eliminated 90% of Afghanistan's extensive trade of high-grade morphine and heroin. Once the US seized Kabul and installed its own puppet regime, drug production surged to all-time highs. US forces and their allies became deeply involved in the drug trade that sustained the nation's economy. Today, US-run Afghanistan is the world's biggest drug dealer.

Those journalists like this one who insisted on telling the truth about Afghanistan were fired or ignored. I was booted off CNN for denying their false claims that Iraq had weapons of mass destruction. And that the US was "winning" the Afghan War. I was banned from certain radio and public TV networks for asserting that ISIS was a western invention, backed by Turkey, the US, France, Britain and Israel. I was branded a 'radical' for trying to tell the truth.

I mention these examples to affirm charges, made by the Washington Post, that the entire Afghan conflict was a farrago of lies and half-truths cooked up by the US government to justify a brutal war of aggression against a weak, medieval nation that dared to block our demands for strategic pipeline routes.

The Washington Post played a key role in promoting the lies that opened the way to the US invasion of Iraq. Today, it is doing penance by revealing all the lies that facilitated the Afghan War and the thousands of US soldiers killed or wounded there, the vast destruction wrought on Afghanistan by US warplanes, wide scale torture, starvation, mass killing of civilians and all the other horrors of war.

According to the Pentagon report, the US has wasted at least one trillion dollars ($1 trillion) on its Afghanistan War to no discernible effect other than great numbers of dead and wounded, destroyed villages, machine-gunned farm animals, and vast chemical pollution. If it moves, bomb it is the American credo.

That's why we see the shameful spectacle of US B-1 and B-52 heavy bombers carpet bombing Afghan villages, and swarms of helicopter and AC-130 gunships blasting apart medieval Afghan tribesmen and wedding parties. The Soviets were just as ruthless; but we are more efficient.

America's media, with a few small exceptions, has promoted the Pentagon's war against the Afghan people and totally covered up its atrocities and egregious lies. This war has become a giant, money devouring killing machine that boosts politicians and military contractors. The past presidents who cheered on this disgraceful war against one of the world's poorest, most backward nations deserve to be disgraced.

Related Topic(s): Afghanistan War; Courage; Heroin; Killing; Pentagon; Taliban; Truth, Add Tags
Add to My Group(s)
Go To Commenting
The views expressed herein are the sole responsibility of the author and do not necessarily reflect those of this website or its editors.