All talk, no walk. 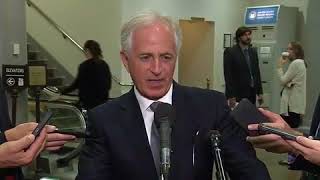 Donald Trump is claiming, for the moment, that he is on exceptionally good terms with congressional Republicans -- even with some of the Republicans that his once-and-future chief strategist Steve Bannon has targeted for political extinction. Indeed, the president declared in his shambolic attempt at a press conference Monday, "maybe, with the exception of a few -- and that is a very small few -- I have a fantastic relationship with the people in the Senate, and with the people in Congress."

This is a demonstrably untrue statement. Most Republicans in Congress did not back Trump when he was bidding for the party's nomination in 2015 and early 2016. Many steered clear of him even after he was confirmed as the party's candidate. And now a rotating cast of characters in the Senate Republican Caucus continues to trip up what passes for a Trump agenda.

Trump's relationship with Senate Republicans is not just chaotic. It's dysfunctional. That produces plenty of fodder for commentary, but not much else. And that's the problem. Trump is a child-man president who blames everyone else for his foibles. But those who criticize Trump are, for the most part, equally immature. They make grand pronouncements, and garner a good deal of media coverage for it. But they do not take tangible, let alone meaningful, steps to hold this president to account.

Sure, a John McCain may jab at the president's "spurious nationalism," as the Arizona Republican did with his Liberty Medal speech on Monday. And a Susan Collins may suggest that she is staying in the Senate to check and balance Trump, as the Maine Republican did last week. Some of these dissenting members may even vote against a Trump-backed proposal, as both McCain and Collins have on the vital issue of health care.

But Trump's Republican critics -- and, to be frank, a number of his Democratic detractors -- are not putting the brakes on this presidency.

Related Topic(s): John McCain; Republican; Trump Attacks Senator Corker; Trump Crime; Trump Ego; Trump Foreign Policy; Trump Illegality, Add Tags
Add to My Group(s)
Go To Commenting
The views expressed herein are the sole responsibility of the author and do not necessarily reflect those of this website or its editors.