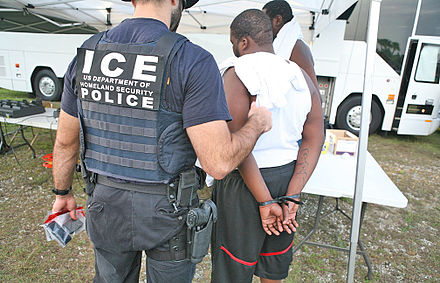 Next week, I'm going to travel across a bunch of imaginary lines drawn on the ground by politicians.

Those lines are called "borders," and in the case of my upcoming trip they separate areas known to most as Florida, Georgia, South Carolina, North Carolina, Virginia, Maryland, Delaware, New Jersey, Pennsylvania, New York, Vermont, and New Hampshire.

There are also a bunch of other borders, too numerous to mention, within THOSE borders, separating places called "counties," "cities," etc.

I don't expect to have any problem crossing all those borders. You probably don't have any problem crossing them either. You may cross two or three borders on your way to work, or when you pop out to grab dinner and watch a movie. Chances are you won't be pulled over at any checkpoints to have your "papers" checked when you cross from Utah into Idaho, or from Cook County into Chicago, to make sure you have permission to cross the imaginary lines.

On my own trip, I could decide to stop traveling, rent an apartment, hit the "help wanted" ads for a job, etc. and nobody would so much as raise an eyebrow (well, nobody but my wife, anyway).

If I suddenly decide to put down roots in Burlington or Lancaster, I won't be put into shackles and deported to Gainesville. I'll just be treated as subject to the laws in Vermont or New Hampshire instead of Florida. No biggie.

But if I want to travel less than 50 miles between Burlington and Saint-Armand, or less than 60 miles between Lancaster and Dixville, or fly to Acapulco or Reykjavik and back for a vacation, a bunch of cultists on both sides of some of the imaginary lines separating those places will start insisting that where I go and what I do is very much their business.

Why? Because they fervently believe that those imaginary lines imbue them with a special magical right to require that I get their permission to move, to stop, to live, to work, etc. And, unfortunately, these particular cultists employ large numbers of thugs to enforce their superstitions at gunpoint.

The next time you hear about a "border crisis," I hope you'll keep in mind that if there really is such a "crisis," it is caused by those cultists and their obsession with controlling others, not by the ordinary, peaceful practice of free people traveling wherever they damn well please.

Related Topic(s): Border Security; Immigration, Add Tags
Add to My Group(s)
Go To Commenting
The views expressed herein are the sole responsibility of the author and do not necessarily reflect those of this website or its editors.