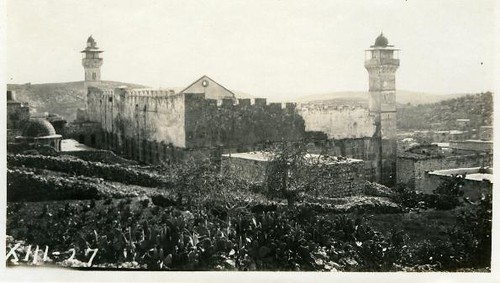 THE WHOLE thing could have been a huge practical joke, if it had not been real.

All of Israel was taken in. Left, right and center. All the newspapers and TV networks, without exception.

There it was: UNESCO has declared that the Cave of Machpelah in Hebron is a Palestinian heritage site.

I ADMIT that I was taken in, too. The news was so clear and so simple, its acceptance so uniform, that I too accepted it unthinkingly. True, it was a bit strange, but stranger things happen.

The "Cave of Machpelah" is no cave at all. It is a large building, which the Arabs call al-Haram al-Ibrahim, the Mosque of Ibrahim, in the center of Hebron, the town the Arabs call al-Khalil, the Friend of God (meaning Abraham).

According to the Bible, Abraham, the forefather of the Jews, bought the place from its local owner as a burial plot for his wife, Sarah. When his time came, he was also buried there, as were his son Isaac with his wife Rivka and his grandson, Jacob, with his wife Leah. (His other wife, Rachel, is supposed to be buried on the way to Bethlehem.)

Is there no limit to Jew-baiting?

A tsunami of emotions surged over Israel. Jews were united in protest. Everybody vented their anger as loudly as possible. Rarely was such unanimity seen here.

IF I had stopped to think for a moment, I would have realized that the whole thing was nonsense. UNESCO does not assign places to nations. World Heritage sites are -- well -- the heritage of the entire world. As a detail, these declarations mention in which country each World Heritage site is located.

The holy church in Nazareth is located in Israel, but it does not "belong" to Israel. The graves of holy Jewish rabbis in Russia or Egypt do not belong to Israel. UNESCO did not say that the Machpelah-al-Haram al-Ibrahim site belongs to the Palestinians. It said that it is located in Palestine.

Why Palestine? Because, according to international law, the town of Hebron is part of Palestine, which was recognized by the UN as a state under occupation. Under Israeli law, too, Hebron is not a part of Israel proper but under military occupation.

I am grateful to an ex-Israeli called Idan Landau who lives in the US. He took the trouble to read the original text and sent us emails to correct our impression. The moment I read it, I hit myself on the brow. How could I have been so stupid!

The UNESCO resolution is fair and correct. It remarks that the site is holy to the three monotheistic religions, as indeed it is. Because of this, a Jewish fanatic -- a settler from America -- once murdered dozens of praying Muslims there. Jewish fanatics have settled nearby.

Related Topic(s): Anti-semitism; Arab; Benjamin Netanyahu; Bible; UNESCO, Add Tags
Add to My Group(s)
Go To Commenting
The views expressed herein are the sole responsibility of the author and do not necessarily reflect those of this website or its editors.