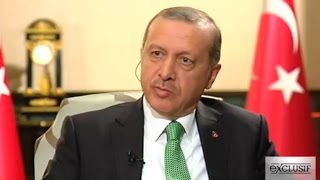 For the second time in a row, Turkish voters have rebuked President Recep Tayyir Erdogan's handpicked candidate for the mayoralty of Istanbul, Turkey's largest and wealthiest city. The secular Republican People's Party (CHP) candidate, Ekrem Imamoglu, swamped Erdogan's Justice and Development Party (AKP) candidate Binali Yildirim in an election that many see as a report card on the President's 17 years of power.

So what does the outcome of the election mean for the future of Turkey, and in particular, its powerful president? For starters, an internal political realignment, but also maybe a dangerous foreign policy adventure.

Erdogan and his Party have been weakened politically and financially by the loss of Istanbul, even though the President did his best to steer clear of the campaign over the past several weeks. Since it was Erdogan that pressured the Supreme Election Council into annulling the results of the March 31 vote, whether he likes it or not, he owns the outcome.

His opponents in the AKP are already smelling blood. Former Prime Minister Ahmet Dovutoglu, who Erdogan sidelined in 2016, has begun criticizing the President's inner circle, including Berat Albayrak, his son-in-law and current Finance Minister. There are rumors that Dovutoglu and former deputy Prime Minister Ali Babacan are considering forming a new party on the right.

Up until the March election that saw the AKP and its extreme nationalist alliance partner, the National Movement Party (MHP), lose control of most the major cities in the country, Erdogan had shown an almost instinctive grasp of what the majority of Turks wanted. But this time out the AKP seemed tone deaf. While Erdogan campaigned on the issue of terrorism, polls showed most Turks were more concerned with the disastrous state of the economy, rising inflation and growing joblessness.

The "terrorist threat" strategy -- short hand for Turkey's Kurdish minority -- not only alienated conservative Kurds who reliably voted for the AKP, but forced the opposition into a united front. Parties ranging from the leftist Kurdish People's Democratic Party and the Communist Party, to more conservative parties like the Good Party, withdrew their candidates from the Istanbul's mayor's race and lined up behind the CHP's Imamoglu.

The AKP -- long an electoral steamroller -- ran a clumsy and ill-coordinated campaign. While the Yildirim tried to move to the center, Erdogan's inner circle opted for a hard right program, even accusing Imamoglu of being a Greek (and closet Christian) because he hails from the Black Sea area of Trabzon that was a Greek center centuries ago. The charge backfired badly, and an area that in the past was overwhelming supportive of the AKP shifted to backing a native son. Some 2.5 million former residents of the Black Sea live in Istanbul, and it was clear which way they voted.

So what does the election outcome mean for Turkish politics? Well, for one, when the center and left unite they can beat Erdogan. But it also looks like there is going to be re-alignment on the right. In the March election, the extreme right MHP picked up some disgruntled AKP voters, and many AKP voters apparently stayed home, upset at the corruption and the anti-terrorist strategy of their party. It feels a lot like 2002, when the AKP came out of the political margins and vaulted over the right-wing Motherland and True Path parties to begin its 17 years of domination. How far all this goes and what the final outcome will be is not clear, but Erdogan has been weakened, and his opponents in the AKP are already sharpening their knives.

Conn M. Hallinan is a columnist for Foreign Policy In Focus, â€œA Think Tank Without Walls, and an independent journalist. He holds a PhD in Anthropology from the University of California, Berkeley. He (more...)
Related Topic(s): Confrontation; Iran; NATO; Recep Tayyip Erdogan; Strategy; Turkey Elections, Add Tags
Add to My Group(s)
Go To Commenting
The views expressed herein are the sole responsibility of the author and do not necessarily reflect those of this website or its editors.