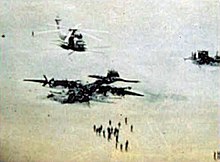 "If Iran wants to fight," US president Donald Trump tweeted on May 19, "that will be the official end of Iran. Never threaten the United States again."

The "threat" Trump appears to be responding to is a statement from Iranian foreign minister Mohammad Javad Zarif that "[w]e are certain ... there will not be a war since neither we want a war nor does anyone have the illusion that they can confront Iran in the region."

Some "threat," huh? Let's seek a little clarity as to just who's threatening whom here:

Twenty-six years later, the Iranian people rose up and toppled the Shah. Over the next few years, Islamists led by Ayatollah Ruhollah Khomeini defeated rival factions and consolidated their power over the country, replacing the monarchy with an "Islamic Republic" -- more of a democracy than western propagandists acknowledge, with a representative parliament, but with extensive power residing in a Shiite "Supreme Leader" and associated clerical councils.

The US government never forgave the Iranian people for overthrowing its puppet regime. For decades, US foreign policy toward Iran consisted entirely of demonization, sanctions, and calls for "regime change." US atrocities of the period include the murder of 290 Iranians (including 66 children) aboard Iran Air flight 655, shot down by the USS Vincennes in 1988.

It wasn't until 2015 that US president Barack Obama began slightly warming relations between the two countries, offering to lift the worst sanctions and return some frozen Iranian funds in return for Iran ending a nuclear weapons program that, according to the Iranians, the International Atomic Energy Agency, US intelligence, and Israel intelligence, didn't even exist.

Enter Trump, claiming during his 2016 presidential campaign that the Joint Comprehensive Plan of Action was a "bad deal," and as president ultimately deciding to violate it (not "withdraw" from it -- it's codified as UN Security Council Resolution, so the only way to "withdraw" from it is to withdraw from the United Nations). Now Trump is escalating yet again because the Iranians finally said "okay, if you're not going to abide by the deal, we won't either."

Perhaps the most serious fiction at play here is the claim that the US seeks "regime change" in Iran because Iran is a brutal Islamic theocracy. If that was the point, the US would also seek "regime change" in, for example, the Kingdom of Saudi Arabia, which is at least as brutal, just as Islamic, and more of a theocracy.

The US seeks "regime change" in Iran because Iran goes its own way and refuses to take marching orders from the US.

Iran is three times as populous and has a more modern and motivated military than Iraq and Afghanistan, neither of which the US has successfully brought to heel.

A US war on Iran would take top prize in the "evil," "stupid," and "self-damaging" categories when it comes to recent American wars.

Related Topic(s): Iran; Iran War; Us Foreign Policy, Add Tags
Add to My Group(s)
Go To Commenting
The views expressed herein are the sole responsibility of the author and do not necessarily reflect those of this website or its editors.