The case for impeachment cannot be made unequivocally. But I believe it is a strong case. 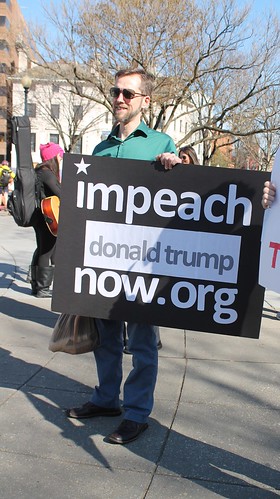 In an ideal world, the thought of impeaching Donald Trump would warrant at least three cheers, along with some somersaults and a marching band (my preference would be for a New Orleans Second Line led by Trombone Shorty). Yet in an ideal world Donald Trump would be nothing but a bad dream. Our world is far from ideal. And so we have a deeply flawed and dysfunctional political system; an angry and credulous Republican base; a corrupted Republican Party in control of the Senate and much else; and Donald Trump in the White House, in control of a vicious bully pulpit and enabled by the vast quasi-state propaganda agency that is Fox News.

And so there are risks for the Democrats to proceed to impeachment. Political risks. For it is obvious that no House-led impeachment proceeding, however well-orchestrated and compelling, can possibly result in a Senate conviction of Trump; the consistent conduct of Senate Republicans for over two years makes this clear. There is thus a risk that an impeachment could be framed as both "overreach" and "failure," and thus could strengthen Trump's hand in 2020.

The risk is real. But it is not as great as it might seem. In addition, there are risks, great risks, associated with doing nothing as Nancy Pelosi and Stenny Hoyer would seem to prefer or proceeding with deliberate caution combined with cautious deliberation as Jerry Nadler and Adam Schiff would seem to prefer. At the same time, there are great opportunities associated with impeachment. Thus the two cheers.

The case for impeachment cannot be made unequivocally. But I believe it is a strong case. In what follows I will lay out its rudiments.

1. The Mueller Report presents a damning ethical and political indictment of Trump even if it does not recommend a legal indictment. Any serious reading of the Report makes clear that Mueller and his team believed that Trump has committed at least 10 forms of obstruction of justice. Ten. Indeed, William Barr's bulls*it to the contrary, the Report also makes clear that there was extensive collusion between the Trump campaign and Russian government-linked actors, even if the collusion did not rise to the level of a chargeable criminal offense (and let us not forget that one reason it did not so rise is that Mueller faced multiple forms of obstruction, and could not or did not interview two of the principals -- Trump and Trump, Jr.). The Report documents a level of unethical and politically dangerous behavior by Trump, both in pursuit of office and in office That is egregious, and might well be unprecedented in U.S. history.

For over a year, Democratic leadership has consistently responded to all questions about holding Trump to account through impeachment by saying "we need to wait for Mueller to complete his investigation." Well, the investigation is now complete. And while it did not lead to new indictments, it was obvious from the start that it would almost certainly bring no indictments, and certainly not an indictment of Trump. But it did bring over four hundred pages of documentation of serious malfeasance. The knowledge is there. There is no longer any justification for "waiting."

2. There is this thing called the U.S. Constitution, and it furnishes Congress with oversight responsibilities that include the right to impeach, convict, and remove a President from office for "high crimes and misdemeanors" associated with a failure to fulfill the obligations associated with the presidential oath of office. The Mueller Report makes clear that while Trump promised "to the best of my ability, preserve, protect and defend the Constitution of the United States," he has in fact consistently demeaned, flouted, and violated the Constitution, and has sought to preserve, protect, and defend himself, the rule of law be damned.

Congress has a constitutional duty to hold this President to account via impeachment. It is ironic that while the House Democratic leadership dances gingerly around this responsibility, it is some of the newer and younger House Democrats, including two democratic socialists, Rashida Tlaib and Alexandria Ocasio-Cortez, who have taken the lead on emphasizing the importance of constitutionalism (these democratic socialists are proving themselves to be more committed to democracy than a great many of their colleagues).

3. Of course, impeachment is a political and not a strictly legal process, and so it can only commence on the basis of political judgments about whether or not presidential malfeasance rises to a level of "high crimes and misdemeanors" rather than low ones, and whether such malfeasance constitutes a real threat to the republic. At the same time, it has been obvious for over two years, at least to almost all Democrats and many others as well, that Trump's actions do constitute a threat to the republic. This is a political judgment, not about the next election but about the state of democracy itself.

4. The Democratic House leadership has been extremely circumspect about impeachment. A cynical interpretation of this cautiousness would be that these leaders might be legislative leaders but they are not broad, national political leaders, that they are not predisposed to make and act upon such strong political judgments about the state of democracy, and that they are all about winning elections and thus retaining the powers of incumbency. Such a cynical interpretation has some merit. But it is insufficient.

For their circumspection also has merit -- to a point. The political judgment that Trump constitutes a threat to democracy, and must be removed from office, is necessarily linked to another and equally important political judgment: what is the best and most likely way to remove him from office? For it would be absurd, and obviously counterproductive, to move to impeachment because Trump is an imminent danger, if doing so were to weaken the chances of winning the 2020 elections and strengthening the chance that Trump would win in 2020 and thus extend his dangerous presidency until 2024. For this reason, the questions posed by Democratic leaders who are reluctant to impeach Trump -- including the contenders for the Democratic presidential nomination who, with the exception of Elizabeth Warren, have been fairly mute about impeachment -- have credibility, and must be engaged, and criticized. And while I strongly believe that there are ethical and constitutional arguments for impeachment, it is ultimately the political argument that is dispositive.

In short, it is politically foolish to reject impeachment, and politically wise to move forward with it.

commondreams.org is a progressive publisher
Related Topic(s): Impeachment; Trump Against Democracy; Trump Attacks Democrats; Trump Bully In Chief; Trump Untrustworthy, Add Tags
Add to My Group(s)
Go To Commenting
The views expressed herein are the sole responsibility of the author and do not necessarily reflect those of this website or its editors.