There are a lot of behaviors being exhibited by those in positions of power in the US that seem disparate and odd. We watch Trump who is imposing sanctions on country after country, dreaming of eradicating his country's structural trade deficit with the rest of the world. We watch pretty much all of US Congress falling over each other in their attempt to impose the harshest possible sanctions on Russia. People in Turkey, a key NATO country, are literally burning US dollars and smashing iPhones in a fit of pique. Confronted with a new suite of Russian and Chinese weapons systems that largely neutralize the ability of the US to dominate the world militarily, the US is setting new records in the size of its already outrageously bloated yet manifestly ineffectual defense spending. As a backdrop to this military contractor feeding frenzy, the Taliban are making steady gains in Afghanistan, now control over half the territory, and are getting ready to stamp "null and void," in a repeat of Vietnam, on America's longest war. A lengthening list of countries are set to ignore or compensate for US sanctions, especially sanctions against Iranian oil exports. In a signal moment, Russia's finance minister has recently pronounced the US dollar "unreliable." Meanwhile, US debt keeps galloping upwards, with its largest buyer being reported as a mysterious, possibly entirely nonexistent "Other."

Although these may seem like manifestations of many different trends in the world, I believe that a case can be made that these are all one thing: the USthe world's imperial overlordstanding on a ledge and threatening to jump, while its imperial vassalstoo many to mentionare standing down below and shouting "Please, don't jump!" To be sure, most of them would be perfectly happy to watch the overlord plummet and jelly up the sidewalk. But here is the key point: if this were to happen today, it would cause unacceptable levels of political and economic collateral damage around the world. Does this mean that the US is indispensable? No, of course not, nobody is. But dispensing with it will take time and energy, and while that process runs its course the rest of the world is forced to keep it on life support no matter how counterproductive, stupid and demeaning that feels.

What the world needs to do, as quickly as possible, is to dismantle the imperial center, which is in Washington politically and militarily and in New York and London financially, while somehow salvaging the principle of empire. "What?!" you might exclaim, "Isn't imperialism evil." Well, sure it is, whatever, but empires make possible efficient, specialized production and efficient, unhindered trade over large distances. Empires do all sorts of evil thingsup to and including genocidebut they also provide a level playing field and a method for preventing petty grievances from escalating into tribal conflicts.

The Roman Empire, then Byzantium, then the Tatar/Mongol Golden Horde, then the Ottoman Sublime Porte all provided these two essential servicesunhindered trade and securityin exchange for some amount of constant rapine and plunder and a few memorable incidents of genocide. The Tatar/Mongol Empire was by far the most streamlined: it simply demanded "yarlyk"tributeand smashed anyone who attempted to rise above a level at which they were easy to smash. The American empire is a bit more nuanced: it uses the US dollar as a weapon for periodically expropriating savings from around the world by exporting inflation while annihilating anyone who tries to wiggle out from under the US dollar system. 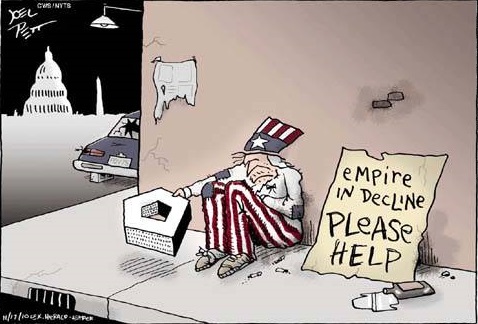 All empires follow a certain trajectory. Over time they become corrupt, decadent and enfeebled, and then they collapse. When they collapse, there are two ways to go. One is to slog through a millennium-long dark ageas Western Europe did after the Western Roman Empire collapsed. Another is for a different empire, or a cooperating set of empires, to take over, as happened after the Ottoman Empire collapsed. You may think that a third way exists: of small nations cooperating sweetly and collaborating successfully on international infrastructure projects that serve the common good. Such a scheme may be possible, but I tend to take a jaundiced view of our simian natures.

We come equipped with MonkeyBrain 2.0, which has some very useful built-in functions for imperialism, along with some ancillary support for nationalism and organized religion. These we can rely on; everything else would be either a repeat of a failed experiment or an untested innovation. Sure, let's innovate, but innovation takes time and resources, and those are the exact two things that are currently lacking. What we have in permanent surplus is revolutionaries: if they have their way, look out for a Reign of Terror, followed by the rise of a Bonaparte. That's what happens every time.

Lest you think that the US isn't an empirea collapsing oneconsider the following. The US defense budget is larger than that of the next ten countries combined, yet the US can't prevail even in militarily puny Afghanistan. (That's because much of its defense budget is trivially stolen.) The US has something like a thousand military bases, essentially garrisoning the entire planet, but to unknown effect. It claims the entire planet as its dominion: no matter where you go, you still have to pay US income taxes and are still subject to US laws. It controls and manipulates governments in numerous countries around the world, always aiming to turn them into satrapies governed from the US embassy compound, but with results that range from unprofitable to embarrassing to lethal. It is now failing at virtually all of these things, threatening the entire planet with its untimely demise.

What we are observing, at every level, is a sort of blackmail: "Do as we say, or no more empire for you!" The US dollar will vanish, international trade will stop and a dark age will descend, forcing everyone to toil in the dirt for a millennium while mired in futile, interminable conflicts with neighboring tribes. None of the old methods of maintaining imperial dominance are working; all that remains is the threat of falling down and leaving a huge mess for the rest of the world to deal with. The rest of the world is now tasked with rapidly creating a situation where the US empire can be dealt a coup de grâce safely, without causing any collateral damageand that's a huge task, so everyone is forced to play for time.

There is a lot of military posturing and there are political provocations happening all the time, but these are sideshows that are becoming an unaffordable luxury: there is nothing to be won through these methods and plenty to be lost. Essentially, all the arguments are over money. There is a lot of money to be lost. The total trade surplus of the BRICS countries with the West (US+EU, essentially) is over a trillion dollars a year. SCOanother grouping of non-Western countriescomes up with almost the same numbers. That's the amount of products these countries produce for which they currently have no internal market. Should the West evaporate overnight, nobody will buy these products. Russia alone had a 2017 trade surplus of $116 billion, and in 2018 so far it grew by 28.5%. China alone, in its trade just with the US, generated $275 billion in surplus. Throw in another $16 billion for its trade with the EU.

Those are big numbers, but they are nowhere near enough if the project is to build a turnkey global empire to replace US+EU in a timely manner. Also, there are no takers. Russia is rather happy to have shed its former Soviet dependents and is currently invested in building a multilateral, international system of governance based on international institutions such as SCO, BRICS and EAEU. Numerous other countries are very interested in joining together in such organizations: most recently, Turkey has expressed interest in turning BRICS into BRICTS. Essentially, all of the post-colonial nations around the world are now forced to trade away some measure of their recently won independence, essentially snatching defeat from the jaws of victory. The job vacancy of Supreme Global Overlord is unlikely to attract any qualified candidates.

What everyone seems to want is a humble, low-budget, cooperative global empire, without all of the corruption and with a lot less life-threatening militarism. It will take time to build, and the resources to build it can only come from one place: from gradually bleeding US+EU dry. In order to do this, the wheels of international commerce must continue to spin. But this is exactly what all of the new tariffs and sanctions, the saber-rattling and the political provocations, are attempting to prevent: a ship laden with soya is now doing circles in the Pacific off the coast of China; steel I-beams are rusting at the dock in Turkey"

But it is doubtful that these attempts will work. The EU has been too slow in recognizing just how pernicious its dependence on Washington has become, and will take even more time to find ways to free itself, but the process has clearly started. For its part, Washington runs on money, and since its current antics will tend to make money grow scarce even faster than it otherwise would, those who stand to lose the most will make the Washingtonians feel their pain and will force a change of course. As a result, everyone will be pushing in the same direction: toward a slow, steady, controllable imperial collapse. All we can hope for is that the rest of the world manages to come together and build at least the scaffolding of a functional imperial replacement in time to avoid collapsing into a new post-imperial dark age.

Reprinted with permission from Dmitry Orlov.

Dmitry Orlov is the author of Reinventing Collapse: The Soviet Example and American Prospects, The Five Stages of Collapse: Survivors' Toolkit, and the forthcoming Shrinking the Technosphere. Born in Russia, he moved (more...)

Related Topic(s): American Empire, Add Tags
Add to My Group(s)
Go To Commenting
The views expressed herein are the sole responsibility of the author and do not necessarily reflect those of this website or its editors.

A Soft Landing for American Empire?

Poverty Minus the Meaningless Numbers