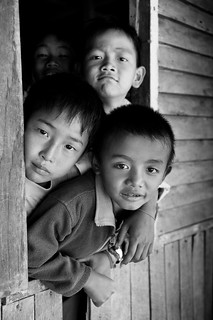 Boys in Burma peek out a window. The future they'll see is in transition.
(Image by Wagner T. Cassimiro 'Aranha')   Details   DMCA

Burma's democracy dream has shattered because of a deep-rooted strategy played by the military-backed ruling party. As analysts have expected earlier, an important power struggle inside the ruling Union Solidarity and Development Party (USDP) has started in full swing in July-August this year.

Some people may ponder that the ruling party has been refining its structure ahead of the upcoming 8-November elections as the canvassing time is nearer. But many political analysts think differently of the current episode. In recent months, gossips of a split between the influential House Speaker and the President, both former generals under Burma's military regime, had begun to come up apparently.

Ex-General Thura Shwe Mann, the head of Burma's military-backed ruling party, was assumed as one of the most influential figures in Burma's quasi-civilian government. Moreover, he also served as Speaker of the Lower House Parliament, a powerful leading role he was assigned since 2011. However, he was at this time disgracefully removed from chairmanship of the ruling USDP, in what gives the idea of defeating a main political opponent by President Thein Sein in advance of the new elections unveiling.

Approval of toppling Shwe Mann came after groups of security police were seen inward bound the H.Q. of the ruling USDP and an official statement of the ruling party says that President has sacked Shwe Mann after a special meeting of powerful USDP senior members close to the president in Nay Pyi Taw.

Shwe Mann is the front-runner as the actual reform-minded leader of the ruling party due to reconciliation approaches to former political prisoner and Nobel laureate Aung San Suu Kyi, head of the key archrival National League for Democracy.

It is supposed that Shwe Mann's eagerness to shape ties with Suu Kyi displeased many hardliners in the ruling USDP including ex-Senior-General Than Shwe, who seems to be kept an eye on political developments in Burma after a half-century of military rule.

President Thein Sein formerly asserted that he wouldn't want to serve a second presidential term. But now, Thein Sein wants to remain in office for safety reasons. The judgment for removal of Shwe Mann came just before the closing date of candidates' registration to contest in the polls ended last Friday.

The split deepens in recent weeks once the USDP under Shwe Mann ignored some senior military officials to accept as its candidates for the upcoming elections. Over a hundred of army officers resigned their military ranks to play a part in the election but only 59 were accepted as candidates.

Shwe Mann's exclusion is just the latest tumult to shake the USDP in recent periods, after two leading figures seemingly leave the party as they were apparently refused definite seats in the upcoming polls. Aung Min, the president's leading cease-fire envoy with ethnic rebel groups, and Soe Thein, the incumbent Minister of the President's Office and previous Commander in Chief of the Burma Navy, will have to run as independent candidates in 8 November elections.

Although it seems to be an internal strife in the USDP, the actual fact may be linked to the constitutional dilemma. President Thein Sein and the military camp totally refused to amend the 2008 Constitution especially of article 436 which bar every amendment against the military's benefits. Section 436 prescribes that constitution amendment needs the approval of more than 75 percent of all members of parliament.

Burma's key opposition party, the National League for Democracy (NLD), along with the 88-Generation Students' Peace and Open Society, launched a vast public gathering in Yangon and Mandalay last year, calling on the people to support the struggles for amendment of the imbalanced Section 436 of the 2008 Constitution ahead of the general elections in 2015.

Political analysts underlined that it would be dangerous to amend the constitution as military seizes 25 percent of the parliamentary seats. The 194-page 15-chapter Republic of the Union of Myanmar Constitution 2008 was promulgated by the previous military junta in May 2008.

In addition, the development of partnership between Shwe Mann and Aung San Suu Kyi was one of the signs that helped happening gloomy atmosphere. Some observers are skeptical as they assumed Shwe Mann was using Suu Kyi's image to gain upper hand in power struggle with President Thein Sein. Finally, it was in vain and even it might hurt Suu Kyi and her party in one way or another.

Shwe Mann's highest aspiration of reform was warning the army to control the political alterations that led pushing the military out of politics. It's clear that Thein Sein and the army keep an eye on Shwe Mann who was moving towards an electoral alliance with Suu Kyi and the NLD. The ruling party and the army look as if they do battle with prodemocracy people including the ex-general and house speaker.

As a result, the practice of using security police to implement defeating of Shwe Mann has shocked a number of optimists including western diplomats. The United States expressed concerns over sack of Shwe Mann, calling for the safety measure of public trust in the democratic transition.

On the other hand, many political analysts consider with regard to sacking of the chairmanship of the ruling party by force will lead shattering the democracy dream of impoverished Southeast Asian country.

Related Topic(s): Burma; Democracy; Elections; Parliament; Reform, Add Tags
Add to My Group(s)
Go To Commenting
The views expressed herein are the sole responsibility of the author and do not necessarily reflect those of this website or its editors.

Is Burma's reform backtracking as press freedom at stake?

Burma's junta pays no heed to Freedom of Expression

No Space for Press Freedom in Burma's Elections