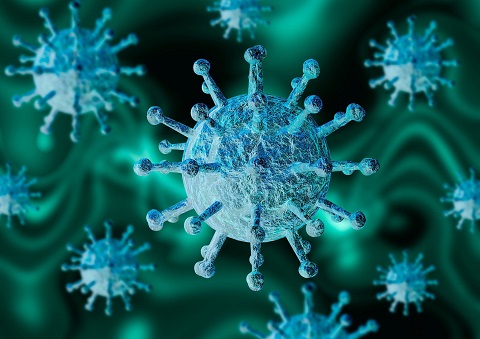 Science has revealed the SARS-CoV-2 virus in spectacular imagery rendered by the electron microscope
(Image by urbanwildland.org/)   Details   DMCA

Myth, magic and ritual largely define pre-modern thought. Now, and at least since the Enlightenment, science attempts an explanation of the world. It is around points on an epistemological spectrum, bounded by these simplistic characterizations, that societies cohere. From the time of Socrates, it is the analysis of these systems of thought that form the basis of philosophy, the modern version of which, since Kant, has developed as a critique of knowledge. Early in the twentieth century, the American philosopher John Dewey established the concept of 'Publics', arguing that within societies, smaller groups develop around shared perceptions of potential harm. Our general understanding of the world, and an awareness of the threats humans face within it, are now subject to a global transformation.

Science has revealed the SARS-CoV-2 virus in spectacular imagery rendered by the electron microscope. It is pictured as a florid, multi-colored, globular life form, but it is the virus's invisible-to-the-naked-eye transmission across the pervious borders of human skin that have infected our bodies and haunted our imaginations. Its colonization of humanity, having been previously confined to Asian bat populations, has enabled the pathogen to express itself dramatically in the form of a global pandemic. As image, performative infection, scientific phenomenon, and statistical event, the little microbe has assumed the role of protagonist in the world's unfolding present.

We, as a predominantly passive (as in locked-down) subject population, receive broad-brushed synopses of scientific findings and assume that a medical understanding of the virus, as well as therapies such as a vaccine, will be established within this system of thought - and will eventually halt the pandemic. What science leaves out are those forms of awareness contained in the fundamentals of pre-modern thought which I characterized as myth, magic and ritual. Yet science, founded on an objectification of the natural world, may now be taking account of the co-mingling of the human and the non-human which has always been the creative province of non-civilizational storytelling, sorcery and ceremonial observance. There has been a disruption of modernity whereby new versions of ancient wisdoms may infiltrate.

Our common understanding of modernity, as it has developed over the last century and a half, depends on the work of Darwin, Marx and Freud and their respective explanations of evolution, capitalism and the unconscious. An awareness of the comingling of life-forms in a world in which we humans no longer enjoy sovereignty reveals the hard truth that our story is no longer all about us. Philosophy has usually designated humanity as the unique province of intentionality, of expressions of will, and rendered humanity's setting - its environment as a largely mechanical world, allowing for its appropriation and exploitation entirely according to human appetites. Biology has previously tended towards a teleological version of evolution which establishes humankind as its final triumph. The unconscious is now explored in ways that are breaking down the mind-body binary in seeking the biological unconscious. As philosophers, social theorists, political theorists, biologists and ecologists take up the notion of a co-evolved, co-existing world, reflecting their understanding of the entanglement within and amongst life-forms, the fortress of modernity is coming under siege.

Donna Haraway, Professor Emerita in the History of Consciousness Department at U.C. Santa Cruz, has given us the term, sympoesis, which denotes a sharing, multi-species approach to the processes of life-making. Bruno Latour, the French Philosopher and former historian of science, extends agency to biota (plants and animals) and as well as abiota (climate), which he collectively characterizes as willful 'actants'. Timothy Morton, the object oriented ontologist, ascribes sensuality to objects, while Jane Bennett, a Professor of Political Theory at John Hopkins, is a vital-materialist who studies the human-nonhuman 'assemblage' - a word she uses to identify an 'arena in which stuff happens', inhabited by 'a spectrum of agentic capacities'.

Parts of this sort of thinking derive from the breaking down of scientific notions of individuality. Scott F. Gilbert, a Professor of Biology at Swarthmore College specializing in developmental genetics and embryology, challenges the idea of an anatomical individual by observing that, "Only about half the cells in our bodies contain a human genome. The other cells include about 160 different bacterial genomes." Each of these bacterial species forms complex ecosystems. He points out that what has been characterized as our 'sacred DNA', is in fact violable. Our bacterial symbionts (each half of a symbiotic relationship) also confer heritable traits which link to our metabolism and brain function. We know now that we are all holobionts - hybrid organisms that depend on persistent communities of symbionts. We maintain bacterial microbiomes within which viruses coexist, and they, in turn, form the human virome. Just as there are both healthy and deleterious bacteria, there are both benign and pathological viruses. So it is that we inherit, live and die, at least partly, by our non-human symbiont communities.

Each bacterial and viral member of its respective biome and virome has a face. But if we are currently haunted by just one, another 1.7M viruses are waiting to infect those who attend the continuing push of urban development into the farthest reaches of the global, but especially Asian, wildlands where they have long inhabited the viromes of native fauna. There is irony in this capitalist agenda of exploitation and extraction wreaking a viral revenge. The Dean of Yale School of Public Health, Dr. Sten Vermund, has opined that, "There is no greater threat to the economic well-being of planet Earth than pandemic respiratory illness." How long ago was it that the sages were suggesting that global warming another by-product of capitalism - offered a threat of similar magnitude?

Jane Bennett writes, in, Vibrant Matter, A Political Ecology of Things, 2010, that all matter is vital. But she goes further. She reprises John Dewey's idea, established in, The Public and its Problems, 1927, of 'Publics' which suggests that political communities function as ecosystems. Bennett sees this as confirmation of their literal organicism. She writes that, "Dewey imagines a public as a set of bodies affected by a common problem generated by a pulsing swarm of activities." We cannot be sure what Dewey meant, but Bennett's phrasing clearly indicates her interpretation. The spark of life retrogrades through her sentence, from 'pulsing swarm', briefly touching down on 'common problem' and then leap frogging to 'a set of bodies'. It is a leap she makes, and I suggest that it is in these terms that we may now be experiencing Covid-19 as part of a human-nonhuman assemblage - sparking the vital matter of an organic political ecosystem.

She goes on to note that Jacques Rancière, the French philosopher, in his, Disagreement: Politics and Philosophy, 1999, suggests the radical potential of these politicized groups. He identifies a disruptive force within the public, or 'demos', that consistently trends towards exposing, ""the ultimate secret of any social order - that there is no natural principle of domination of one person over another." Additionally, he suggests that there is a protean force that flows through the demos that disrupts ways in which people see. A Covid-19 public has formed around the global presence of the virus. We may see, as members of this public, Wuhan, the sprawling capital of China's Hubei province, its eleven million be-masked people, even its famous cherry blossoms, its bio-labs, and its teeming wet market, as a part of our origin story - but more compelling are the personal, political and bureaucratic impacts of the arrival of the virus in our local communities. All these particularities and events cohere within Bennett's notion of the 'arena in which stuff happens', and it is in these swarms of vibrant materials that she discerns the comings and goings of 'agentic assemblies.' A decade ago, at the time of writing Vibrant Materials, she posed such questions as, "Can a hurricane bring down a President?", and ominously, "Can an avian virus jump from birds to humans and create havoc for systems of health care and international trade and travel?"

Cruise ships and recalcitrant, populist, demagogic political leaders; the absence of medical equipment; freedom-loving, gun-toting deniers of prescriptive social distancing are some additional actants pulsing through our shared, global space. Within it, we now understand, bat-borne viruses can infect human populations in days, or weeks, and vaccines are likely to appear only after the virus has mutated to a less symptomatic version (which it tends towards in order to maximize its host population).

Meanwhile, many of us may feel more and more removed from the organic processes that support our lives isolated from food production, desensitized to the violence of resource extraction, and, until very recently, by virtue of modern standards of hygiene and near universal vaccinations, securely separated from the planet's miasma of bacteria, viruses, fungi and protozoa. Our modernity has been our protection against the nonhuman. But what Bennett and others have been preaching, and which science has been confirming since at least the beginning of the twenty-first century, is that we have always been thoroughly entangled in the nonhuman world - cosmically, biologically, and botanically.

Related Topic(s): AWARENESS; Biology; Corona Virus Coronavirus Covid-19; Coronavirus Pandemic; Health; Illness; Pandemic; Politics; Population; Threat; (more...) Viruses; Well-being, Add Tags  (less...)
Add to My Group(s)
Go To Commenting
The views expressed herein are the sole responsibility of the author and do not necessarily reflect those of this website or its editors.