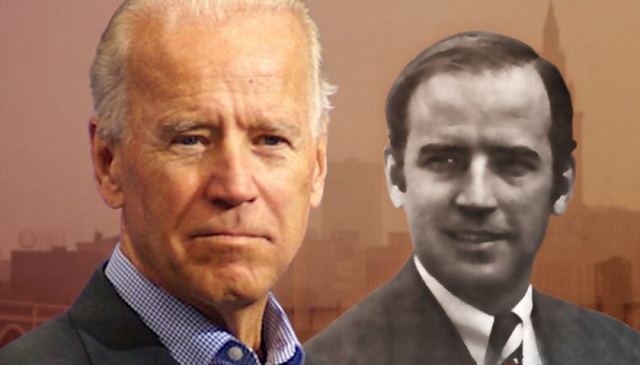 It's really quite simple: the rogue oligarchs and corporations who now run this country constitute the enemy. Since becoming a Senator in 1973, your favorite Irish uncle, Joe Biden, has actively collaborated in the extreme capitalism, racism, nationalism, and police state-ism that enable the oligarchs' agenda; and while most ably empowered by their instrument, the Republican Party, between times, it is more than adequately carried out by the Democrats. What we see now, with a mostly pliant Trump, with a conservative majority Supreme Court, and with a divided Congress where stasis rules, is the Oligarchy's ideal. But as the political calendar moves on a proven collaborator must be installed, over the next twelve months, as the Democratic nominee in the 2020 tryst with their current champion just in case.

As has been demonstrated lately, juridical interpretations of a moldering and malleable document enable the Supreme Court to rule by decree. Indeed, in terms of command by capricious diktat, the Court, with the Constitution functioning as its Holy text is barely surpassed by the Ayatollah and the Koran. Democrats, Biden now apparently preeminent among them as the former Vice President and a Senator of Noachian longevity, stand by to facilitate this process. Not so long ago, Obama, the Appeaser-in-Chief, with the collaborationist Biden at his side, did sterling work on the oligarchs' behalf. Obama's failure to adequately press for the instatement of Justice Merrick Garland in 2016, ensured the Court's conservative majority.

Having just greenlit gerrymandering in the Rucho v. Common Causedecision, the Court has neatly bookended their earlier Citizen's Uniteddecision which allows for unlimited corporate contributions to political parties. As parties are given free rein to engineer Congressional districts to maximize their advantage and be assured of ludicrous amounts of funding, the last vestiges of representative democracy fall away.

The Democratic Party, despite its professed support of Labor and egalitarian social programs, is a tragically weak bulwark against this prevailing agenda of enrichment of the few at the expense of the many. In recent history, we have suffered through two intensely collaborationist governments, overseen by Bill Clinton and Barak Obama. In 2016, we only escaped a third because of Trump's victory over his putative opponent Hillary Clinton. She, of course, was a Presidential collaborationist in the making, having served her time as both a Senator and as Secretary of State in a government committed to the demands of capital and to the realpolitik of Empire. In place of a Presidency infused with a profoundly false consciousness, we have instead, the real deal. Frightening isn't it?

The Republican Party has a base of self-interested voters composed of the very wealthy and of corporations and their officers. As Noam Chomsky points out, this represents a highly insubstantial voting bloc. But the Party has engineered an expansion of its base (on behalf of the very few) by appealing to the religious right through its latter-day adoption of Right-to-Life policies, by appealing to the racism of poor and middle-class white populations with horrific anti-migrant policies, and by its appeals to the base instincts of nationalists which it appeases through populist rhetoric, a foreign policy of blood, bombast and a lethal drone program all wrapped in crass veneration of the flag. Democrats have stood idly by as this fabulist reinvention has taken place and, indeed, now ape many of its tropes. Biden's sign-off at the recent Democratic nominee cattle-call of 'Good night, and God-bless our troops' was heinously ironic for a man who voted for the greatest blood bath of American troops in this century the egregiously unwarranted and illegal invasion of Iraq.

Members of both major parties practice equal-opportunity genuflection before the uber-rich who, in turn, ensure their election. It is a closed system, but not hermetically so, as was illustrated by the recent Mid-Terms. The great non-white, non-male hopes of Alexandria Ocasio-Cortez, Ilhan Omar and their cohort of progressive comrades, is a welcome leavening of an institution predominantly populated with old white males beholden to the rich and powerful.

But we should not forget that Biden remains typical of the great, antediluvian Congressional horde. His complicity in furthering the oligarchs' agenda is well known. He was complicit in the passage of the racist Violent Crime Control and Law Enforcement Act of 1994; complicit in Obama's canny retention of private health insurers in the mix of the Affordable Care Act; and complicit in the ACA's denial of health services to 'illegals'. This blatant act of government triage is coupled, in its inhumanity, with the deportation, during Obama's two terms, of almost three million 'illegal' immigrants. Both actions are eerily redolent of past foreign genocides and directly comparable to our own home-grown genocide when Native Americans were herded into reservations which offered tragically limited game-lands, poor soil, disease and overcrowding. Now, in this revisiting of the past, our deportees are returned to impoverished and violent countries, fatally corrupted by the United States, where the climate emergency has made life for the poor a living (and dying) hell. It is worth recalling that these deportations are perpetrated in a nation founded by 'illegals'.

Lest we forget, Biden is complicit too, in negotiating the passage of The American Recovery and Reinvestment Act of 2009, designed to halt the Great Recession but which ended up famously rewarding Wall Street and punishing Main Street, and which furthermore, permanently enshrined the 'temporary', highly regressive tax policies of the Republican, George W. Bush administration. A notable win for the Oligarchy.

Biden's collegial interactions with old-line segregationists early in his career, his vituperative opposition to federally mandated school busing in the 1970's and his intemperate denial of a fair hearing for Anita Hill which resulted in the lifetime appointment to the Supreme Court of a highly reactionary Justice indicate both his racism and sexism. Never mind the allegations of inappropriate touching of female staff, constituents and Congressional colleagues.

The aging Senator's contributions to these acts are not ones of omission but of commission, and his Senatorial tasks are undertaken in a spirit that takes them far beyond the bounds of appeasement: they reflect the overt behavior of a revanchist collaborator, a confederate of the enemy. His legislative and administrative impulses are to reclaim the worst of our colonial past and the worst of our superannuated attitudes of racism, sexism and jingoism. At heart, his schtick reflects the instincts of an old-school populist expressed through a duplicitous patter of avuncular demagoguery. Let it be said: Joe Biden is Trump without the flim-flam and without the social media reach. He makes a terrific patsy for the oligarchs. If he gains the nomination and goes on to win in 2020, it will be because it is their determination that, as a political idiot savant, Trump is intrinsically unreliable, that he harbors notions of independence, and is more deeply obsessed with his own aggrandizement and dynastic pretensions than the enrichment of their class.

Predictably, the Democratic Party's establishment (the Democratic National Committee) loves Biden. Despite the caveat expressed above, we can expect him to join the long list of their failed presidential candidates and thus allow his opponent to claim victory in a Jimmy Carter certified, free and fair election honestly fought against an ideological foe. But the people will once more be denied a choice. It will be Tweedledum (R) and the collaborationist Tweedledee (D) yet again.

Related Topic(s): Choice; Complicity; Democratic; Democrats; Democrats DNC; Establishment; Joe Biden; Msm Oligarchy Enablers; Nomination; Obama; (more...) Oligarchy; People; Republican, Add Tags  (less...)
Add to My Group(s)
Go To Commenting
The views expressed herein are the sole responsibility of the author and do not necessarily reflect those of this website or its editors.