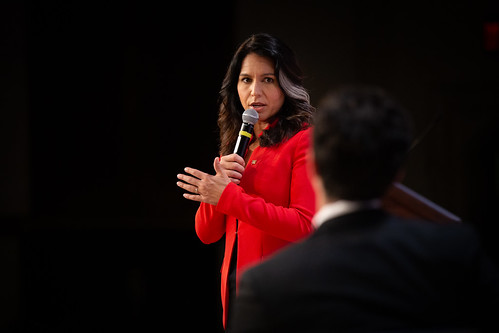 Bernie Sanders, according to recent reports, has taken the lead in the Iowa Caucus. At the same time, Tulsi Gabbard, the first choice for nearly all "progressives" (according to my own leftist definition) within my circle (both face-to-face and online) from the very beginning of her entry into the field, has a long history of support for Sanders and his positions. She went so far in 2016 as to quit her position as vice-chair of the Democratic National Committee to support Sanders as he opposed Hillary Clinton for the Party's nomination, an offense the Clinton people have not forgotten. A choice to put Gabbard onto a ticket with Sanders would not be the result of some political juggling, as for example an attempt to balance a ticket geographically. The two have similar views and would be naturals for working together.

Problems for Gabbard stem from her progressive position itself. Simply take a look at her platform, laid out for such ease of use by viewers that just clicking on the link and perusing for a minute would tell you more, and more quickly, than another thousand words posted here. She is everything a progressive - or a Green for that matter - could wish for, and as a woman "of color" she encompasses much of the overall gender and race issue for which so many insist "it is time". It is that very progressive position that threatens the prevailing power structure to such a degree that it places her in its crosshairs. It is the reason for her having been marginalized from early on in her campaign. Her platform is similar to that of 2008 presidential hopeful Dennis Kucinich who, in multiple ways, was "disappeared" by the media and by his own Party, rotten elements of which have become ever more evident in recent years.

The possibility of a talked-about Sanders/Warren ticket took a major hit when the two contenders recently had a tiff in front of a microphone apparently not known to be active. The two as a team could be a match from Hell with their baggage of hard feelings, and they're both very long in years, he 78, she 70. This is old blood not setting the stage for new blood, and it's not a good message to send to younger citizens already disillusioned with the system and resentful of elders they see as largely responsible for a future that looks damned bleak to them. Photographs abound showing Warren clasping hands with Hillary Clinton in 2016, both clad in the same shade of blue as if to project an image of uniformity and continuity.

Assuming a Sanders/Warren ticket were to win an election, consider their respective ages after one, then two, terms. Do the math. Tulsi Gabbard is 38 and coming into her most productive years as a political force. What Sanders wants to accomplish cannot be done in a single presidential term. If, as is certain, Old Man Time makes it impossible for him to go on, without the kind of strong young partner with the kind of background that a Vice-Presidency would provide, any progress he could make would very likely come to a grinding halt. Sanders and Gabbard, 40 years apart, are philosophically in synch like no two other democratic contenders, such that the two could be vastly more effective together than apart over the long haul. It would be a shame to miss such a combination.

Related Topic(s): Democratic; Election; History; Leftist; Nomination; People; Progressives; Race, Add Tags
Add to My Group(s)
Go To Commenting
The views expressed herein are the sole responsibility of the author and do not necessarily reflect those of this website or its editors.