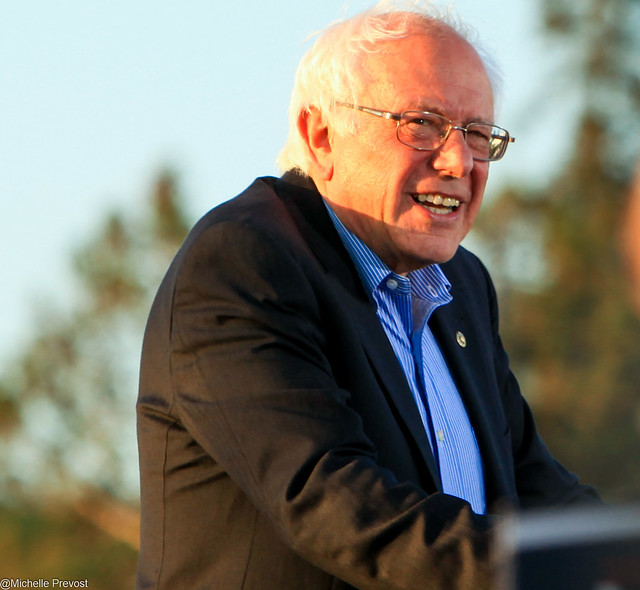 But that doesn't mean that Bernie Sanders didn't make mistakes. So let's take a look at those.

No matter what happens between him and Joe Biden, and it isn't over yet, Sanders deserves credit for some remarkable achievements. In the face of formidable establishmentarian opposition, Jewish, with a speaking manner that is anything but conventional in U.S. politics, relying only on small individual donations and promoting a political agenda many Americans would consider radical, Bernie Sanders currently controls 42% of the Democratic primary vote against a recent sitting vice president. Much of his agenda, including making college affordable, increasing the minimum wage, and improving the healthcare system, has become mainstream Democratic Party policy after many decades during which the party didn't even pretend to give a damn about normal people. Bernie Sanders is running an issue-based campaign, not one based purely on personality. Even if he loses, historians will mark this election as evidence of the strength of progressive and left-leaning electoral politics.

But he's not perfect. There are things that he could have/could still do better.

Politics is first and foremost about framing, and Sanders isn't great at it. "Medicare for All" is meaningless to millions of Americans who have had no contact with Medicare and don't know anything about it. "Free healthcare" would have been easier to understand and would not have turned off on confused union members who already have decent healthcare plans. "Free college tuition," on the other hand, tells too little of the story. Sanders' plan only helps low-income college students but many voters seem to still think that he wanted to use their taxes to help out children of wealthy people. The "Green New Deal" hasn't been defined or well-publicized beyond the fact that it would be expensive.

Sanders' plan for student loan forgiveness was also presented in a problematic fashion. Many Americans don't have college degrees; they wondered, why should we pay for those who do? Many other Americans went to college, took out student loans and then paid them back. Why shouldn't millennials do the same? There are good answers to those questions: millennial student debt is many factors higher than Generation X and Baby Boomer debt because tuition has skyrocketed at a rate much faster than inflation. Student loan forgiveness would stimulate the economy by freeing up young people to buy cars and homes. People who already paid their loans should have been added as beneficiaries of his plan so that they didn't feel like suckers due to a simple accident of birthdate. Most importantly, Sanders should not have proposed student loan forgiveness without coupling it to a free college tuition program and/or job retraining program for people who are older and don't have college degrees or need retraining in order to retool for the 21st century.

Speaking of costs, I found it endlessly frustrating that Bernie Sanders never seemed able to clearly answer the question of how he would pay for his proposals. Generally, he should simply have said: "I'll take it out of the Pentagon budget." Maybe this wasn't true. If it wasn't true, he should have made it true. Not only is the defense budget bloated, most Americans, including people who favor strong military, know about the $800 toilet seats. I'm not sure why he didn't bash the military.

He also hasn't been good about explaining Medicare for All. What he should have said was, everyone is going to pay less for healthcare, so much less, that even though your taxes will go up a bit, you'll still come out way ahead. And if you got hit by something catastrophic like cancer, it would all be covered. Instead, he talked about how European countries somehow managed to pay for national healthcare plans. He's right about that, but Americans have been told that Europeans pay high taxes. He needed to explain in plain language that that would not happen here.

He ignored my advice to own and explain his self-described "democratic socialist" label. He probably assumed that it would be more of a problem in the general election against Donald Trump, but what he underestimated was the Democratic Party's long history of red bashing as well as the well-established fact that other people will define you if you don't do it yourself. He should have followed the example of JFK when he gave a speech assuring Americans that he would not take orders from the pope as a Roman Catholic. Sanders should have given a speech entirely about democratic socialism.

Some things, it's hard to do anything about. A campaign has the candidate that it has with a personality that he or she comes with. Bernie Sanders has an underlying vulnerability and warmth that his tendency to bellow often covered up. The media had a field day portraying him as a guy who likes to yell a lot. This is where something like "The Man from Hope" video that the Bill Clinton for President campaign created would have come in handy. A biographical look at Bernie's roots in Brooklyn, his childhood struggling in a working-class family and the premature death of his mother due to poor healthcare would have helped to humanize a very human person.

Images of him being manhandled by cops during his participation in the civil rights movement of the early 1960s couldn't have hurt him with African-American voters who ended up turning out for Joe Biden.

Of course the biggest mistake Sanders made may not have been a mistake at all. He ran inside the Democratic Party. They were never going to let him have the nomination.

He had to know that.

Related Topic(s): Bernie Sanders; Bernie Sanders 2020; Bernie Sanders Legislative Agenda; Campaign Smears; Democratic; Healthcare; Politics; Vulnerability, Add Tags
Add to My Group(s)
Go To Commenting
The views expressed herein are the sole responsibility of the author and do not necessarily reflect those of this website or its editors.