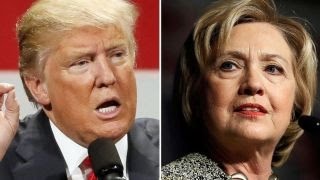 Austerity is officially dead, at least at the presidential candidate level. Congress? We'll have to wait and see. Both Hillary Clinton and Donald Trump are talking about increased spending on public infrastructure.

Hillary Clinton has launched her post-convention campaign push by talking about a "100-days jobs plan" that includes a "Make It in America" plan to invest $10 billion in manufacturing communities.

Meanwhile Trump took a break from his fight with the parents of a fallen soldier to tweet his plan, which is, "We will bring back the American dream!"

"She vowed to make the largest investment in jobs since World War II in her first 100 days in office. ...

"'We are going to put millions of Americans to work,' Mrs. Clinton said. 'We're going to invest in infrastructure -- our roads, our bridges, our tunnels, our ports, our airports, our water systems.

"'But not just what you can physically see. We need a new electric grid to be able to take and distribute all the clean renewable energy we're going to be producing.'

"Mrs. Clinton said every U.S. home and business should have access to high-speed broadband Internet."

Trump's plan is basically that he is a billionaire businessman who knows how to make deals and he will make good deals for America. "And it will be beautiful."

But seriously, in late June Trump gave a speech outlining his plan, but offered few details. The speech was summarized by Voice of America, in "Trump Unveils Jobs Plan, Takes Aim at Clinton":

"Trump outlined a seven-step plan to bring back jobs to the U.S. The plan included withdrawing the U.S. from the Trans-Pacific Partnership (TPP) free trade deal, renegotiating the terms of the North American Free Trade Agreement, and appointing trade negotiators to identify trade violations by foreign countries.

Related Topic(s): Donald Trump; Economy; Hillary Clinton; Infrastructure; Jobs, Add Tags
Add to My Group(s)
Go To Commenting
The views expressed herein are the sole responsibility of the author and do not necessarily reflect those of this website or its editors.