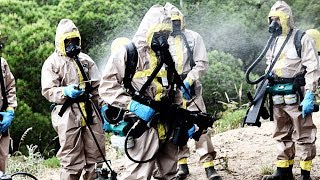 The world is getting sick from the spreading COVID-19 virus. North Americans and Europeans are now as horrified as Chinese by the invisible killer that has put their hospitals under siege.

They are also getting a grim foretaste of what biological warfare would be like. Those not cowering in terror in their homes would likely be amazed to learn that some of their governments are still churning out highly toxic chemical and biological agents in hidden factories.

Back in 1990-91, I was based in Baghdad covering the first of the Gulf Wars. The US was threatening to attack Iraq for daring to invade oil-rich Kuwait, which used to be part of Iraq until "detached" by the British Empire. At the same time, the eight-year Iran-Iraq War had just ended in a bloody stalemate. The US and Britain had pressed Saddam Hussein's Iraq to invade Iran, seize its oil wealthy and overthrow the Islamic government in Tehran.

Facing a US-British invasion, Saddam Hussein ordered all foreigners in Iraq rounded up and confined to tourist hotels. Among the foreigners, I discovered four British scientific technicians who had been sent, or "seconded," to a newly built biowarfare chemical complex south of Baghdad at Salman Pak. They were then trucked to Baghdad as hostages against a US attack.

I managed to slip into the compound that held them and talked for hours over mugs of tea. The British tech team told me they had been secretly sent to Saddam Hussein's Iraq by Britain's Ministry of Defense and Britain's MI6 Secret Intelligence Service to help Iraq's military develop and deploy biological weapons for use against numerically superior Iranian forces on the Central Front, Al-Faw Peninsula, and again Kurdish rebels in the north.

Most raw materials for the germ and gas came from Europe. Feeder stocks for the germ/poison gas weapons came from the main UC chemical warfare plans at Ft. Detrick, Maryland.

A popular joke among western journalists in Baghdad went, "of course Saddam Hussein has weapons of mass destruction. We have the delivery receipts."

The times Iraq deployed its chemical/bio weapons against Iran, the results were nightmarish: blinded soldiers choking to death, unable to breathe; soldiers with their skin peeling off; dead mothers holding babies in their arms. Many of these attacks were targeted by US satellites positioned over Iraq. US Air Force officers worked closely with their military counterparts Iraq.

To this day, there remain tens of thousands of maimed, blinded, crippled Iraqi soldiers. It was Iraq's version of World War I, cheerfully financed by the US, Saudi Arabia and Kuwait. Iraq's once thriving economy is mostly in ruins. US and British bombing even destroyed most of Iraq's sewage systems, water reserves, hospitals and bridges. Contaminated water alone killed 500,000 Iraqi children, according to the UN, a price "worth paying" said US Secretary of State Madeleine Albright.

The moral of this terrible story, and the current worldwide epidemic, is to immediately ban all chemical and biological weapons everywhere. Destroy all chem/bio warfare plants everywhere, including the US, Russia, China, India and Israel.

The COVID-19 virus is merely a taste of what a real biological war would be like. Many around the world who bear us ill cannot help but take notice how the world's richest, mightiest nation can be brought to its knees by some invisible bugs.

When President Trump fulminates against China over COVID-19, he should be advised that the anthrax and other germ weapons used against Iraq in 1990 originated at Fort Detrick, just 50 miles NW of the White House, a mere one hour drive if traffic is not too heavy.

Related Topic(s): Biological Warfare; Chemical; Corona Virus Coronavirus Covid-19; Iran; Iraq, Add Tags
Add to My Group(s)
Go To Commenting
The views expressed herein are the sole responsibility of the author and do not necessarily reflect those of this website or its editors.