(Image by LAUSD)   Details   DMCA
When a school submits a charter to the district for authorization, it does so with an address that represents the center of its proposed service area. In the case of Citizens of the World 4 (aka Citizens of the World East Valley) the provided location was Sherman Way and Ranchito Avenue in LAUSD Board District 6. A house near this location has an estimated value of $712,245 and 6.3% of the students in the nearest public school, Hazeltine Avenue Elementary, are white.

Instead of opening in the described neighborhood, Citizens of the World (COTW) is set to rent space in a building formerly occupied by the Adat Ari El Day School in Valley Village which is located in LAUSD Board District 3. A house in this neighborhood is estimated to sell for $1,200,000. The nearest public school is Burbank Boulevard Elementary. At this school 25.2% of the students are white.

To prevent this type of bait and switch, the LAUSD requires charter schools to operate "within a three-mile radius from the location identified by the petitioners of the proposed new charter school." Since "the center point for CWC 4 can be found at the intersection of Sherman Way and Ranchito Avenue," the Adat Ari El site is beyond this three-mile radius. In fact, the neighborhood where COTW will now be located, Valley Village, is not even mentioned in the charter application.

With the LAUSD board controlled by members who were elected with $10,876,952.42 in campaign contributions from supporters of the charter schools, it should not be surprising that the district is ignoring its own rules and not forcing COTW to obtain the required material revision. Instead, it is now expanding the definition of the "proposed target community" to include the entire zip code of the address provided.

Under this new interpretation of the rules, the LAUSD Charter School Division should have not even accepted the application from COTW to open up a new location. As part of the defined application process, the petitioner is required to "consider the existing District and charter schools operating within the...three-mile radius." If the district's assessment that the Adat Ari El site is "less than 1.5 miles" from the "target community" then Colfax Charter Elementary School should have been included in this evaluation as it is located less than a mile away from COTW's proposed new campus. Dixie Canyon Avenue Elementary School is also not listed even though it is exactly three miles away from the 91405 Zip Code.

Should COTW be forced to comply with the requirement that it obtain a material revision, then all of the schools within the new three-mile range would need to be included in a Community Impact Assessment. The impact on the very successful Colfax Charter Elementary School could be significant. 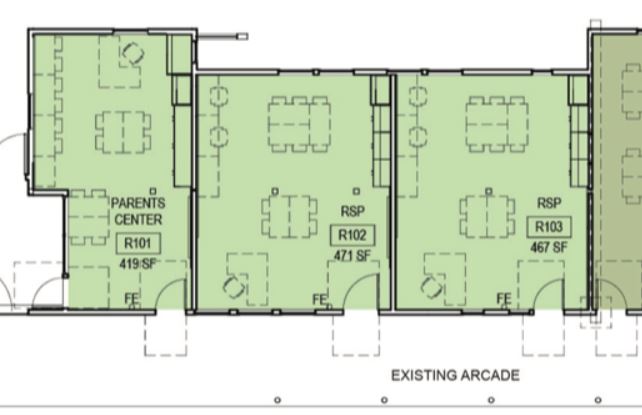 All of these rooms planned for during Colfax's expansion would be subject to takeover by Citizens of the World under PROP-39
(Image by LAUSD)   Details   DMCA
Under the current interpretation of PROP-39, any space that does not include a teacher with a roster is considered to be "empty." For Shirley Elementary School in Reseda, this has meant that they have had to give rooms devoted to the delivery of special education services to Citizens of the World West Valley. For Colfax, new space has recently been built to meet demand. This space includes rooms for programs for which a roster is not assigned including a parent center, a computer lab, a science lab and space for Resource Specialist Programs (RSP). This space could be taken away from Colfax students if COTW were to request to co-locate on this campus.

If COTW enrollment projections are to be believed, then they will definitely require more space than they have leased at Adat Ari El. In the day school that was previously operating in this space, only 127 students were served in the 2016 to 2017 school year. According to the charter petition, COTW is supposed to start with 234 students and increase to 1,070 students within five years. This guarantees that COTW will seek out more space by co-locating on nearby campuses where any school with "empty" space, no matter how it is being used, could be a target. Colfax is less than a mile away.

(Image by Citizens of the World Charter Schools)   Details   DMCA
When confronted over PROP-39 co-locations, the LAUSD has repeatedly stated that they have no option but to turn over space to publicly funded private schools. Charter schools should also be subject to this strict interpretation of the rules. If Citizens of the World wants to operate more than three miles from the address they identified as the center of their service area, then they should be forced to obtain the required material revision. If the District wants to change the rules so that the school can operate within three miles of an entire Zip Code, then Colfax should have been included in the initial application to the district. Either way, the matter should have a hearing before the public.

The school board was elected to represent the interests of the 80% of LAUSD students who attend district-run public schools. This includes the very successful community at Colfax. All of the board members, especially those elected on a platform of protecting public schools, need to step up and insist that Citizens of the World be forced to follow the rules.