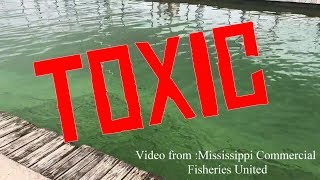 Today there are reports of toxic algae blooms affecting the French Riveria, Lake Erie, and the Gulf of Mexico. See: here, here, and here.

Corporate farming is a huge contributor to toxic algae blooms. In days of old, farming was done intelligently. Every year part of the land was left fallow or planted with soil restoring plants that were plowed under. This practice kept the soil from being exhausted. Today, farming is done in order to squeeze every cent of profit out of the land. Over-utilization exhausts the soil. Chemicals take the place of crop rotation. Corporate farming requires the massive application of chemical fertilizers. Rains cause the applied phosphorus to run off into streams, which carries the pollutant into rivers, lakes, and seas. The Gulf of Mexico has large areas of "dead zones" where no life exists. Phosphorus gets into aquifers and pollutes water supplies. These highly costly events occur, because business is permitted to impose its costs on the environment and on third parties dependent on environmental resources that are degraded and destroyed by unregulated capitalism.

Yet the mass murderer has many defenders and apologists. Indeed, far more defenders than a courageous opponent of the police state such as Julian Assange has.

For Americans, making a buck is the largest value in the society. The people making the bucks don't care that they are making the world uninhabitable. They will have their yachts, their private airplanes, their mansions, and their fancy women. However, their progeny, if any, will have a diminished future.

Related Topic(s): Capitalism Over Humanity; Chemical; Environment; Farming; Water, Add Tags
Add to My Group(s)
Go To Commenting
The views expressed herein are the sole responsibility of the author and do not necessarily reflect those of this website or its editors.