First elected in 2006, Monica Garcia is the most senior member of the Los Angeles Unified School District (LAUSD) School Board. Before that, she served as the Chief of Staff for accused felon Jose Huizar when he sat on the board. Garcia's self-evaluation of her efforts during this time can be summed up in this 2016 quote:

Thanks to term limits, the 2021 - 2022 school year will be Garcia's last on the board. She has already considered a run for congress and failed at an attempt to succeed her former boss on the Los Angeles City Council, so her name will likely appear on the ballot for a different position in the future. However, running on a resume that says "I helped lead a school district where after ten years I thought most of the kids could still not read" is not going to get her very far. In the year-and-a-half that she has left in her board seat, she has to build a legacy.

Knowing that economically disadvantaged neighborhoods have been hardest hit by the COVID-19 pandemic, Garcia has seized on an opportunity to be seen as the board member who fights for "equity." While opposing the reinstatement of the Parent Engagement Committee, she called for the creation of a committee devoted to "equity" that would have met weekly. She is also thought to be behind the "Equity Is Justice 2021" resolution that was recently considered by the board. For some reason, the person proposing this motion was not named in the meeting's agenda.

While recognizing the needs detailed in the resolution, funding measures that affect all of the district's 600,000 students need to be fully considered and carefully planned. Therefore, the waiver of Board Rule 72, which ensures that the public gets adequate notice of all proposed resolutions, was unwise. I tried to make my concerns known in public comments before the item was considered, but speaking spots were quickly allocated. I, therefore, spoke before an earlier agenda item that gave away public-school space to a privately operated Early Childhood Education Program. These are my comments:

Sometimes short-term solutions to long-term problems have unforeseen consequences. For example, today we are looking to give away public facilities to a privately run organization. I wonder how much of that facility is available because of the $7 billion building program that Monica Garcia championed. At the time we were short on classroom space but did anybody consult the demographic expert to see where we are headed in just a few short years? Now we have declining enrollment while we pay off bonds for empty classrooms.

Another example is the "Equity Is Justice 2021" resolution. What are the unforeseen consequences of this resolution? Will it push parents on the west side to charter schools? Maybe that's what Monica Garcia wants, considering she was elected with $622,000 in charter school money.

In the past, the district has transferred Title One money to schools that were in more impoverished areas. This is the reason that Granada Hills Charter High School left the district. They became an independent charter school to recapture their Title One funding. Monica Garcia says that she was for the program that did that, but she voted not only for the renewal but for the expansion of Granada Hills Charter High School.

Monica also says that she's for equity. If this is the case, where is the special-education funding in this resolution? We all know that special education is chronically underfunded. But then again, Monica Garcia is the one who said she's "not about funding Special Ed, she just knows we have serious issues to how we can serve our own kids."

Given the unintended consequences of this resolution, I would like to know why we are waiving board rule 72 and rushing it through its passage? If this resolution is a good idea then it will stand up to scrutiny. I, therefore, urge you to vote against the waiver and discuss the measure in full view with the public. Maybe a good place to start would be the Parent Engagement Committee. Oh yeah. Kelly Gonez refuses to allow this committee to meet. 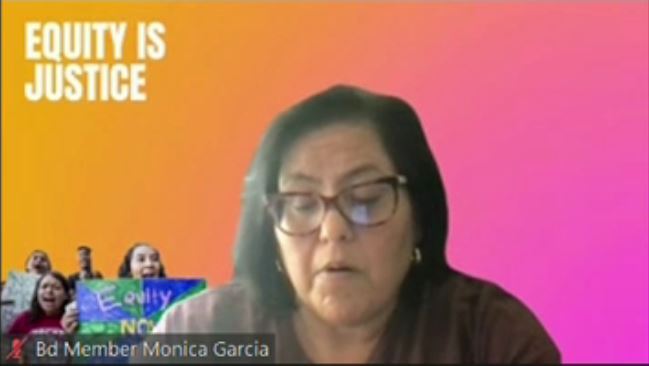 Given that Garcia is in the majority of board members elected with the support of the charter school industry, it is not surprising that the waiver was passed allowing this major change in how district schools are funded to be considered without public input. When Kelly Gonez was asked afterward if special education was included, she replied that the details had not been worked out yet. This was after she voted for both the waiver and the resolution.

This resolution speaks to Garcia's legacy more than she realizes. Throughout her tenure, she has latched on to social issues and put solutions in place without careful consideration of the effects of the implementation of these measures. This bull-in-a-china-shop method of running the district was on display when Garcia helped to eliminate student suspensions without a plan to ensure that classrooms were not disrupted. Last year she defunded the Los Angeles School Police Department without first making sure that students would be protected. Now she has changed funding formulas in a way that could push even more children from wealthier parts of the city into charter schools. While Garcia moves on to her next position, the students of the LAUSD will be left with the mess.
________________________________