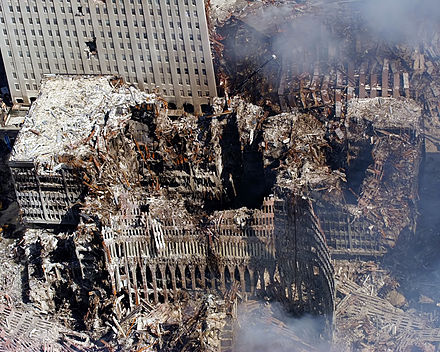 It has been a long and difficult learning curve for this nation. (A learning curve is used to describe the time and effort required when learning something challenging.) We have had 20 years to learn something from the challenging events of 9/11. Let's take stock of what lessons we seem to have learned from those events and the ramifications of the directions those lessons have taken us. Let's also look at a set of alternate lessons we could have learned but chose to ignore. Perhaps we are finally ready to learn those lessons now.

The events of that fateful day have echoed through twenty years and have led this nation in a direction that has been anything but healing.

One context to help understand those events is the story of the Phoenix, which rises in light and glory from the ashes of destruction. It is an image of redemption, not of vengeance. It is the recognition that after destruction it is possible to accept a new reality and rise above those ashes to find renewal and healing.

However, our leadership chose to focus on other lessons, those of violence and vengeance, calling up the old dark gods of war, of blood and destruction, to focus not on the possibilities of redemptive learning but to focus on the ashes and the smoke, the threats to "our way of life" and the fear of evil forces. And where has that gotten us?

The events of 9/11 were used as a pretext to support an agenda of those in control of our governance. "Our way of life" was the agenda of neo-liberal capitalism, passed off to the world as some holy version of "democracy" which was, in reality, simply the philosophy that producing and protecting wealth was the solution to all problems. That agenda was about the dominance of wealth and power and the projection of American power globally. The byword quickly became revenge; punishing those who dared to threaten our dominance and power in the world. The response was retribution, payback and putting them in their place. This meant all the macho responses, war, torture, repression, and oppression. It meant expanding the "Security State". It meant even more surveillance, including domestic surveillance, and included increased spending on the military, CIA, NSA, FBI, and the police. Spending over a trillion dollars on secrecy and information gathering. It meant draconian measures for anyone suspected of "un-American activities". It meant detentions and questionable legal practices in the name of security.

Only after the clarifying information provided by Snowden and WikiLeaks did the extent of such intrusions become evident.

There was the extension of the War on Terror from Afghanistan to Iraq and then, globally.

Following the neoliberal economic model, every problem represents an economic opportunity for profit and power. As a result, the money flowed freely, much of it unaccounted for, and a lot of it into corporate pockets with no-bid contracts.

On the domestic front there was the revival of "super-patriotism", the kind that makes anyone suspect who does not follow the party line and/or does not have the right skin color and ethnic background. It was blind support of the military action and the administration's policies. Any perspective on events that did not conform to the national narrative was treated like heresy and could even lose you your job.

Politics became even more of a money game, with corruption and manipulation becoming increasingly rampant. The tax system was inverted with those on the bottom paying the highest percentage of their incomes in taxes, while corporations and those on the top paid less and less and even no taxes at times.

Regulation became even more of a dirty word, and the free-for-all that became the "American way of life" took a greater and greater toll on the environment. The infrastructure was left to deteriorate. The social safety net was sold off to fund the war machine and the security state. Workers, without the protection of unions, became economic pawns, watching their salaries and wages stagnate as they lost ground to the increasing cost of living. The minimum wage became a travesty forcing workers to live below the poverty level, even while working full-time.

Finally, the social fabric of the nation began to unravel as it wore thin enough to expose the illusions of the great scam perpetrated on the American citizens.

Meanwhile, any attempt to give the people a reasonable voice was thwarted again and again by the Democratic Party, as they chose to become just another party paying homage to the power of an economic elite. The final result for a segment of the citizenry was a frustrated turn to the dark side including the possibility of destruction of the entire system, the acceptance of racism, bigotry, radical partisanship and an us-or-them philosophy that could spell an end to democracy and an acceptance of an aristocracy of a rich and powerful elite.

And then, the pandemic. With a do-nothing approach by our national leadership, this pandemic became an us-or-them event, some choosing to welcome the virus into their lives without regard to others and others choosing to do those things that had worked to stop earlier pandemics. The dominant choice became economics over health. Even with a kind of "magic bullet" of a vaccine, there was strong resistance dooming the pandemic to an increasingly long run. Over 600,000 deaths (some would put that number at a million) seemed to make no difference. If this were a conventional war with those kind of death figures, we would have mobilized the nation to face the threat together. But the number of collaborators continues to provide significant resistance to any resolution.

Related Topic(s): Democracy; Democracy; Learning; Pandemic, Add Tags
Add to My Group(s)
Go To Commenting
The views expressed herein are the sole responsibility of the author and do not necessarily reflect those of this website or its editors.