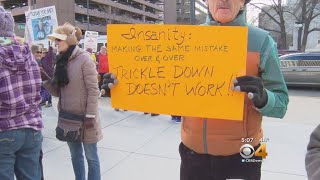 As 2017 ends and 2018 begins, Democrats from red states and blue states will run against the Gilded Age policies of President Trump and Republicans in Congress that are widely rejected by majorities of voters as the midterm elections come closer.

Democrats will run against the highly unpopular tax bill, which so heavily favors the wealthiest Americans and largest corporations that it is reminiscent of the Gilded Age policies of the late 19th century that fomented major income inequality and preceded the presidency of the progressive populist Republican Theodore Roosevelt, who would be a Democrat today.

Democrats will run against the disastrously unpopular GOP plans to repeal and replace ObamaCare, which were in part incorporated into the tax bill that will raise insurance premiums for tens of millions of Americans.

In control of the presidency and Congress, and with eight years to devise health-care policies in opposition to the currently popular ObamaCare, the GOP now owns every insurance premium increase and every problem with the health-care system that hurts or angers voters.

Democrats will run against the highly unpopular and regressive repeal of net neutrality rules by the Trump Federal Communications Commission (FCC), which will raise the price of internet service and streaming video for more than a hundred million Americans who watch movies, television and sports online.

In a recent poll, 83 percent of voters oppose the recent FCC action, which is a gift to giant internet service providers that will raise prices for internet users -- who will retaliate against Republicans at the polls.

It is a striking and historic blunder for Republicans to gamble their hopes for 2018 on three of the most unpopular measures in modern political history on health care, taxes and net neutrality. It is equally striking that with markets soaring and the economy appearing to hum along strongly, neither Trump nor Republicans in Congress have reaped any political benefit and remain highly unpopular today.

Democrats won sweeping victories in the national elections in November 2017. They won a stunning upset victory in the Alabama Senate race. They lead Republicans in generic balloting for 2018 by double-digit margins in most recent polling. In early match-up polls for 2020, potential Democratic candidates lead Trump by large margins. In recent elections, Democratic turnout surged far above any expectations that existed when Trump and the GOP Congress took one-party power in January 2017.

High-quality Democratic candidates are inspired to run for the House and Senate. The intensity of emotion against Trump and Republicans will inspire huge numbers of Americans to vote for Democrats.

The Democratic battle cry in 2018 will be that, on issue after issue, Democrats fight on behalf of the vast majority of Americans, while Republicans fight on behalf of financial elites, special interests and the swampland of lobbyists who serve them. Democrats will charge, with reams of polling data and 2017 voting in their favor, that Republicans are creating massive budget deficits with their lavish generosity toward super-wealthy Americans and giant corporations, which they plan to finance by attacking highly popular and vital Democratic programs including Social Security, Medicare and Medicaid.

The great Democratic battle cry in 2018 will be social justice and a fair deal for all Americans regardless of race, gender or income. Democrats will charge, with facts and public opinion as their friends, that Republicans govern as the party of the few who have the most, at the expense of the many who need and deserve support.

This battle cry is a winning message that creates high odds for a historic Democratic landslide in the midterm elections.

Related Topic(s): 2018 Elections; Democracy; Democratic Values; Democrats; Internet; Obamacare; Republican, Add Tags
Add to My Group(s)
Go To Commenting
The views expressed herein are the sole responsibility of the author and do not necessarily reflect those of this website or its editors.