So for a lot of climate advocates that have been following this space, it is a little bit of a roundabout way of dealing with this. It is a pressure point and I think it is aimed at making Exxon a less appealing investment for shareholders. But something like the Massachusetts Attorney General's case, which is looking more directly at how Exxon was marketing its products directly to consumers, gets more at what the actual relationship between Exxon and the public is and was. And I think that that's something that is going to spook the industry probably a little bit more depending on how it goes.

DIMITRI LASCARIS: Todd, as Alex just mentioned, the New York litigation is focused on how investors were impacted by allegedly false and misleading statements made by ExxonMobil to investors. There are, however, other attempts to hold the fossil fuels industry and Exxon, in particular, accountable for other constituencies who have been damaged and maybe damaged in the future as a result of these alleged false and misleading statements.

For example, I understand that in California there are efforts to hold Exxon accountable for losses and damages to the state's coastal cities. There is now apparently legal proceedings in Massachusetts and in Baltimore, where the Real News is headquartered, the company faces similar charges. Could you talk to us about legal initiatives that seek to vindicate the rights of the people who are directly impacted by climate change, including those who live in coastal cities in the United States?

TODD PAGLIA: Yeah, I mean, I think we're going to see more and more of that coming, Dimitri and I think that there's going to be an onslaught of new legal challenges for this industry. And I think the other side of this though is that, if you look at what's happened with investors over the last decade or so, especially the powerful invest divest invest movement, 70% of divestment has been from coal.

And I think these efforts that we're seeing, the subterfuge coming from Exxon and the other big majors, are really an effort to not only avoid legal liability to prevent also though their shareholders from starting to leave them. Their finances are looking weaker and they are increasingly under threat legally, and I think the divestment campaigns, the next move we're going to see worldwide is increasing focus now that coal is really economically challenged and also facing lots of legal liability in other ways, you're going to see really big moves on divesting from the oil majors and the big oil players. And I think that's also in the background here and what they see coming and it needs to happen fast.

DIMITRI LASCARIS: And finally, I'd like your thoughts from both of you, and I understand that my question's going to call upon you to speculate to some degree, but in my prior life I was a class actions attorney and I had occasion to encounter situations where corporations and indeed entire industries that engaged in mass wrongdoing were so besieged by litigation that eventually their business model just became no longer feasible, no longer profitable, it's not something that they could economically pursue. Do you think that there's a significant prospect that this may ultimately happen to the oil industry, the fossil fuels industry? That legal claims, liability claims, being asserted not only the United States, but globally, could pose an existential threat to the industry as a whole? And why don't we start with you, Alex?

ALEX KAUFMAN: I think that's a big question. I think the oil industry is most often compared to the tobacco industry, which is a fair analogy, particularly in the sense that a lot of the same players who orchestrated the tobacco industry's misinformation campaign about the cancer and health risks of smoking went on to orchestrate a similar campaign about climate change for the oil majors. Now, I think the big difference here is that oil is integrated into so, so, so many different parts of our lives. It's much harder to extract I think from the economy and to extract from just normal modern consumption then cigarettes and smoking where.

So I think that has yet to be seen. I think it's important and few people really take note of the fact that as the oil industry is seeing the shift away from its product in the transportation sector, with the growth of electric vehicles, which they are no longer able to prevent, you're seeing this massive investment in petrochemicals and the production of plastics. And that's moving ahead at a breakneck speed and we're seeing the production of single use plastic products go up just tremendously over the next 20 to 40 years. So I think that is a huge concern that we have to think about. These are companies that understand these risks and can quickly use their massive war chests to diversify. And I think it's going to be a lot harder than it was to go after tobacco or a lot of other industries that have been convicted of wrongdoing in this kind of way.

DIMITRI LASCARIS: And Todd, what are your thoughts about this? I mean, you were an attorney who actually litigated for the vindication of consumer rights against various corporate malfeasers. As an attorney, I think about the cost, just the cost of defending these lawsuits. The stakes are so high that I imagine the company has every incentive to leave no stone unturned. Management is being distracted from the normal business of making as much profit as possible for the executives and the shareholders. Do you think that in the longer run this actually could pose, litigation itself, could pose an existential threat to the industry or do you think that the industry is so deeply entrenched in our economy that we're going to have to find other ways to bring it down?

TODD PAGLIA: I think that lawsuits alone are not going to do it. It's going to be increasingly a factor, a bigger cost, and also it takes their eye off the ball when you have to focus on staying alive as opposed to expanding your plastics market and what have you. But there's two things that are working against us. One is they still have a tremendous amount of money even though their financials are beginning to falter and look a lot less appealing.

Number two, our court systems are broken in a certain way. If you're willing to spend enough money, you can drag a case on for 20 years, and we don't have that kind of time anymore. But I think on the upside, these cases are going to increasingly add costs, take away focus. I think we're going to see a move, moving from coal to divesting away from oil and gas. And you're also seeing a lot more fights in the last three years, more infrastructure fights where pipelines, oil train terminals, and other key pieces of infrastructure were defeated and often at the local level. So I think those factors are going to end up really taxing this industry and eventually driving them out while EVs and all the other cleaner solutions start to gain speed.

DIMITRI LASCARIS: Well, I've been speaking to Alex Kaufman and Todd Pallia about the testimony of Rex Tillerson and the ExxonKnew litigation in the state of New York. Thank you, gentlemen, for joining us today.

DIMITRI LASCARIS: And this is Dimitri Lascaris reporting for the Real News Network.

DHARNA NOOR: Hey, y'all. My name is Dharna Noor and I'm a climate crisis reporter here at The Real News Network. This is a crucial moment for humanity and for the planet. So if you like what we do, please, please support us by subscribing at the link below. Thank you. 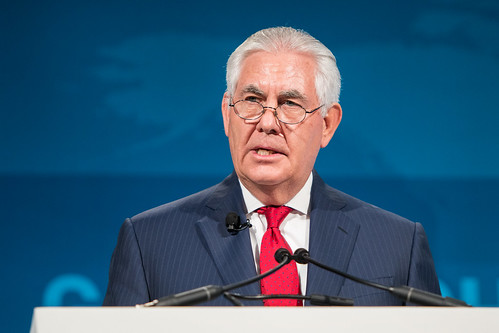 Related Topic(s): Climate Change; Climate Crisis; Climate Heating; Exxon, Add Tags
Add to My Group(s)
Go To Commenting
The views expressed herein are the sole responsibility of the author and do not necessarily reflect those of this website or its editors.