Yet snow leopards, crucially, are a species threatened with extinction.

After the speech I had serious conversations with two top interlocutors, Bern-based analyst Romulus Maya and anthropologist Piero Leirner, a crack authority on the Brazilian military. The picture they painted was realistically gloomy. Here it is, in a nutshell.

When I visited Brasilia last August, several informed sources confirmed that the majority of the Brazilian Supreme Court is bought and paid for. After all, they de facto legitimized all the absurdities that have been taking place in Brazil since 2014. The absurdities were part of a hyper-complex, slow-motion, rolling hybrid war coup that, under the cloak of a corruption investigation, led to the dismantling of industrial national champions such as Petrobras; the impeachment of President Dilma Rousseff on spurious charges; and the jailing of Lula, the work of judge, jury and executioner Sergio Moro, now Bolsonaro's justice minister, who was completely unmasked by The Intercept's revelations.

But there are no structural changes whatsoever on the horizon. The project remains a Brazil sell-out coupled with a thinly veiled military dictatorship. Brazil remains a lowly U.S. colony. So, Lula is out of jail essentially because this system allowed it.

The military abide by Bolsonaro's abysmal incompetence because he cannot even go to the toilet without permission from General Heleno, the head of the GSI, the Brazilian version of the National Security Council. On Saturday, a scared Bolsonaro asked the top military brass for help after Lula's release. And crucially, in a tweet, he defined Lula as a "scoundrel" who was "momentarily" free.

It's this "momentarily" that gives away the game. Lula's murky juridical situation is far from decided. In a harrowing but perfectly plausible short-term scenario, Lula could in fact be sent back to jail but this time in isolation, in a maximum security federal prison, or even inside a military barracks; after all, he's a former chief of the armed forces.

The full focus of Lula's defense is now to have Moro disqualified. Anyone with a brain who's been through The Intercept's revelations can clearly identify Moro's corruption. If that happens, and that's a major "if," Lula's already existing convictions will be declared null and void. But there are others lawsuits, eight in total. This is total law-fare territory.

The military's trump card is all about "terrorism" associated with Lula and the Workers Party. If Lula, according to the harrowing scenario, is sent back to a federal prison, that could be in Brasilia, which not by accident holds the entire leadership of the PCC, or "First Command of the Capital" the largest Brazilian criminal organization.

Maya and Leirner have shown how the PCC is allied with the military and the U.S. Deep State, via their asset Moro, to establish not a Pax Brasilica but what they have described as a "Cocaine Evangelistan" complete with terrorist false flags blamed on Lula's command.

Leirner has exhaustively studied how the generals, for over a decade on their website, have been trying to associate the PCC with the Workers' Party. And the association extends to the Revolutionary Armed Forces of Colombia (FARC), Hezbollah and the Bolivians. Yes, this all comes straight from His Masters' Voice's playbook. 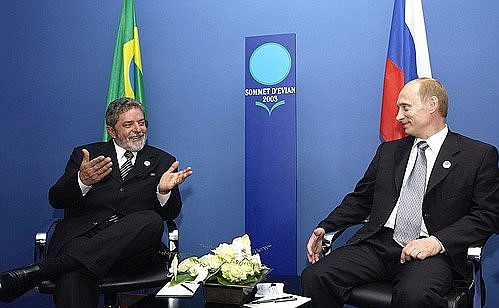 With the military betting on a strategy of chaos, augmented by Lula's immense social base all over Brazil fuming about his return to prison and the financial bubble finally burst, rendering the middle classes even poorer, the stage would be set for the ultimate toxic cocktail: social "commotion" allied with "terrorism" associated with "organized crime."

That's all the military needs to launch an extensive operation to restore "order" and finally force Congress to approve the Brazilian version of the Patriot Act (five separate bills are already making their way in Congress).

Related Topic(s): Corruption; Intercept; Lula; Military; President; Putin; Speech, Add Tags
Add to My Group(s)
Go To Commenting
The views expressed herein are the sole responsibility of the author and do not necessarily reflect those of this website or its editors.