They will soon become the unregulated controllers of our collective destiny.

The principal picture of cultural and socio-economic erosion brought about by the Internet's failure to live up to its early promise could not have been more graphically summed up than it is in his bleak section on what became of the city of Rochester, New York, once the home town of the sprawling and vibrant Kodak film industry, and now a ghost town of boarded up houses and stores, where the murder rate is 340% higher than the national average, where the marrow of the city has been sucked clean by the virtual vampires of Algorithmia. It's so bad there that when Keen went to snap a picture outside Kodak headquarters he was told by a guard, "No photos allowed." As Keen sums up the situation in Rochester,

[W]hat happens if the devastation is not only permanent, but also the defining feature of our now twenty-five-year old digital economy? What happens if the tragedy in Rochester is actually a sneak preview of our collective future"?"

It's hard to see a silver nitrate lining in all this. 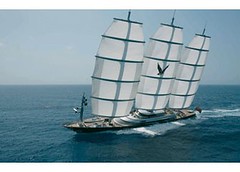 The Maltese Falcon: Silicon Valley exec sailing like rats to New Zealand as the shit hits the fan
(Image by yachtfan from flickr)   Details   DMCA
As the elite hold Caligula-esque parties on football field-sized yachts, where they are served food and beverages by squadrons of waiters naked but for their aprons, and tell their tall tales of Narcissistic genius, while the climate burns all around them and the populace sinks into deeper depravities, it's hard to avoid thinking of Nero fiddling as it all falls down. Or more aptly, Google, Amazon, Facebook and Instagram in an echo chamber, playing a string quartet grosse fugue that somehow makes sense to them, even if its complexity eludes mere dilettantes and aficionados. Or maybe they are as they seem, to Keen and many others, akin to the Four Riders of the Apocalypse finally come to reclaim the "Epic. F*cking. Failure" of human civilization.

Related Topic(s): Civilization; Digital; Failed States; Failed Tech Leadership; Failed_States_of_Mind; Failure; Google; Internet; Money; Surveillance; (more...) Vampires, Add Tags  (less...)
Add to My Group(s)
Go To Commenting
The views expressed herein are the sole responsibility of the author and do not necessarily reflect those of this website or its editors.