Biden and the Democrats need to deliver on the wage hike they promised by any means necessary. Anything less is a moral and political failure. 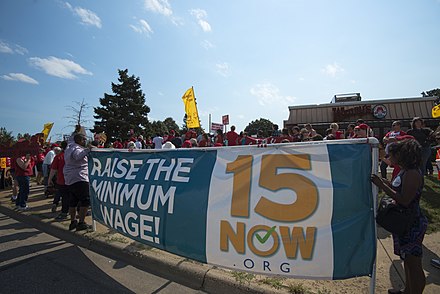 Economist Dean Baker reminds us that for the first 40 years after President Franklin Roosevelt signed the Fair Labor Standards Act in 1938, the national minimum wage "not only kept pace with inflation, it rose in step with productivity growth."

This progress did not deliver the cooperative commonwealth that progressives hoped to achieve. But it was on an economically, morally, and politically sound trajectory.

Unfortunately, it did not continue.

After 1968, Baker explained last year, the minimum wage has not even kept pace with inflation. In fact, while there has been progress at the municipal and state levels of government, the federal minimum wage has not increased by a single penny in the past 12 years -- since 2009, when it reached $7.25 an hour.

What if the minimum wage had kept rising at a rate that respected the contribution of workers? "It would be over $24 an hour today."

So a new Democratic administration could have started where the AFL-CIO does, by noting that, "had the federal minimum wage kept pace with workers' productivity since 1968 the inflation-adjusted minimum wage would be $24 an hour."

He has started with a modest proposal to raise the wage to $15 an hour in stages between now and 2025. This is the definition of incremental progress. "$15 an hour -- and by the way, it's over a four-year period -- is not a radical idea," says Senate Budget Committee Chair Bernie Sanders (I-Vt.). "If you make $15 bucks an hour, you are not getting rich. But at least, at least, you have a shot to live with a minimum of dignity. You don't have to have all the stress and pressure that's on you right now trying to survive on starvation wages."

What The Senate Can Do

The slow march to $15 an hour, as outlined in the American Recovery Act, was always a compromise. And now, the compromise has been imperiled by the Senate parliamentarian's decision that it is unacceptable to use the budget reconciliation process to set a $15-an-hour standard as part of Biden's $1.9 trillion

Related Topic(s): Caucus; Compromise; Democrats; Minimum Wage; Workers, Add Tags
Add to My Group(s)
Go To Commenting
The views expressed herein are the sole responsibility of the author and do not necessarily reflect those of this website or its editors.