There is light at the end of the tunnel, and here are some rousing points of light from 2018, both domestic and international 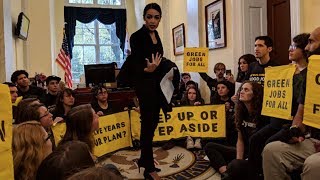 Yes, you could say I'm trying to put lipstick on a pig. 2018 was a year of whiplash, a never-ending series of assaults on our environment, immigrants, people of color, Muslims, Jews, the poor, international law. But there is light at the end of the tunnel, and here are some rousing points of light from 2018, both domestic and international.

1. The election of the progressive new members of Congress, particularly women of color such as Alexandria Ocasio-Cortez, Rashida Tlaib, Ilhan Omar, Deb Haaland, Ayanna Pressley and Sharice Davids. Before even taking office they are shaking up the D.C. establishment: Calling out lobbyists for briefing new members of Congress? Refusing to take the "mandatory" AIPAC trip to Israel? Paying congressional interns? Calling for a Green New Deal and Medicare for All? It's head-spinning for the establishment and thrilling for the rest of us. With these new progressive allies, with Democrats now controlling the House, and with an expanded and invigorated Progressive Caucus, we have a chance to drag centrist Democrats into supporting policies that might not be popular with their big-dollar donors but are wildly popular with the public.

2. 2018 was a year of awe-inspiring youth activism. The Parkland school shooting two days after Valentine's Day led to a massive student-led movement for tougher gun laws. Students mobilized in Washington, D.C., at March for Our Lives and in schools across the country. This same kind of energy and creativity exploded with the Sunrise Movement, a youth movement determined to make climate change an urgent priority for U.S. elected officials with a Green New Deal. And just as the year was coming to an end, a sensational 15-year-old student from Sweden, Greta Thunberg, captured world attention at the UN climate summit with her call for youth to hold adults accountable for the mess they've created. In a fabulous example of synergy between young activists, Greta's school strike (she sat in front of the Swedish Parliament instead of going to school) was itself inspired by the walkouts initiated by the Parkland students.

3. An historical turning point was reached this year to start breaking up the 75-year U.S.-Saudi alliance. With three years of relentless Saudi bombing of Yemen leading to the world's greatest human catastrophe and the barbaric murder of Washington Post journalist Jamal Khashoggi, Congress and business leaders finally began to question their relationship with this retrograde kingdom and its brutal de facto leader Mohammad bin Salman. In an unprecedented vote, the Senate approved a measure to halt U.S. support to the Saudis in Yemen, which is helping promote a negotiated settlement. The effort to curb Trump's support for the Saudi war in Yemen comes at the same time that Trump announced the withdrawal of U.S. troops from Syria and a halving of U.S. troops in Afghanistan. Maybe, just maybe, 2019 will mark the winding down of the disastrous wars that have marked U.S. policy since the 9/11 attacks in 2001.

4. Labor organizing has been on the rise, from teachers to high-tech workers.The audacious 13-day strike by teachers in West Virginia won a 5 percent pay increase and launched a wave of similar actions from Oklahoma to Arizona. West Virginia teachers stood with bus drivers, janitors, school kitchen staff before calling an end to the strike, refusing to take a pay increase until everyone's demands were met. In the tech industry, Google employees pushed the company to end its contract to help with Pentagon with artificial intelligence that could be used in drone strikes. They also demanded that Google not cooperate with Chinese censorship. Microsoft employees are pushing the company to break its contract with ICE; Amazon workers want Jeff Bezos to stop supplying facial recognition technology to the police.

5. Florida's restoration of voting rights through Amendment 4, the ballot measure lifting the state's permanent ban on voting by anyone with a felony conviction, received overwhelming support from nearly 65 percent of voters. It restores voting rights for some 1.4 million people, potentially changing the Florida -- and national -- electoral landscape, since most formerly incarcerated people vote Democratic and the 2000 president election was determined in Florida by a mere 537 votes. Iowa and Kentucky are now the only states that must change this retrograde lifetime ban. But with the myriad examples of voter suppression in the 2018 election, voter rights must be a key focus before 2020!

6. Stopping the Keystone XL pipeline is a victory for the coalition of environmental and Indigenous groups that have been opposing the pipeline for years. Among the opponents is the Cheyenne River tribe. Like Standing Rock in the case of the Dakota pipeline, the Cheyenne River tribe fears a tar sands oil spill from the pipeline would contaminate its waters. President Obama, under tremendous pressure from the grassroots, halted further work in 2015 but Trump started it up again in 2017. Thanks to legal challenges, in November a federal court blocked any further work until the Trump administration undertakes a serious review of its climate impact. This reprieve gives organizers more time...to organize!

7. Medicare for All has the highest level of public support ever recorded. An August poll found that a whopping 70 percent of Americans, including 85 percent of Democrats and 52 percent of Republicans, back the single-payer plan. When Senator Bernie Sanders promoted this idea during his presidential campaign, he was pilloried by liberal commentators. Well, guess what? Medicare for All now has support from 124 House members and 16 senators, including most of the high-profile likely 2020 presidential contenders. Even Barack Obama, who eschewed single-payer in favor of the Affordable Care Act during his presidency, has now endorsed Medicare for All. In 2018, the Congressional "Medicare For All Caucus" was launched with 76 members. Since health care was the top concern for voters in the 2018 midterms, Medicare for All should be a no-brainer for politicians who care more about their constituents than Big Pharma.

8. The election of Andres Manuel Lopez Obrador (AMLO) in Mexico is a bright spot. In a dismal landscape in Latin America, where right-wing governments are on the rise. Crushing the two old dynastic political parties, the PAN the PRI, AMLO's Movement for National Regeneration, or Morena, was just founded in 2014. Ruling a nation mired in drugs, violence and poverty will be tough, but check out the incredible policies he has already put in place! Also, Mexico City elected its first woman mayor, who is also Sephardic Jewish, a leftist, a climate scientist, and a Nobel Peace prize winner. Her first act was to disband the riot police, who have been responsible for much of the political violence in Mexico City.

9. Ethiopia's new prime minister, 42-year-old Abiy Ahmed, took office in April and immediately went to work ending the 20-year war with Eritrea, releasing thousands of prisoners, allowing dissidents to return home and lifting censorship. Then he appointed a cabinet with 50 percent women and the nation's first female president! His astounding reforms have won him adoration among millions, but he has been challenged with an assassination attempt by the old guard and ethnic clashes. His message to the nation's 90 ethnic groups remains one that Donald Trump should hear: "Take down the wall, build the bridge."

10. Armenia experienced a dramatic, people power uprising against corrupt, autocratic rulers, in which one out of every three Armenians participated. The campaign of nonviolent civil disobedience was led by a young member of parliament, Nikol Pashinyan. After initially attacking the protesters, the police later joined them. In April, the massive street protests were so powerful they pushed the prime minister to resign and coerced the ruling party to elect the opposition street leader, Pashinyan, as prime minister. In December, the new political bloc went on to trounce the former ruling party 70 percent to 5 percent in parliamentary elections. This "velvet revolution," which represented the climax of a decade of peaceful protest focused on human rights, women's rights, workers' rights and environmentalism, succeeded in taking power without shedding a drop of blood!

So there you have it. Despite Trump in the White House and the rise of right-wing movements around the globe, 2018 was chock full of good things -- most of which went under-reported because of all the attention on Donald Trump. And oh, speaking of Trump, I left out probably the most important development of all: the wagons encircling Trump, making his presidency seems less and less tenable. So...put on your seat-belts and hold tight -- or better yet, prepare to take to the streets. If you thought 2018 was frenetic, 2019 promises to be one helluva ride.

Related Topic(s): 2018; Climate; Health Care Universal - Single Payer; Medicare; Women, Add Tags
Add to My Group(s)
Go To Commenting
The views expressed herein are the sole responsibility of the author and do not necessarily reflect those of this website or its editors.