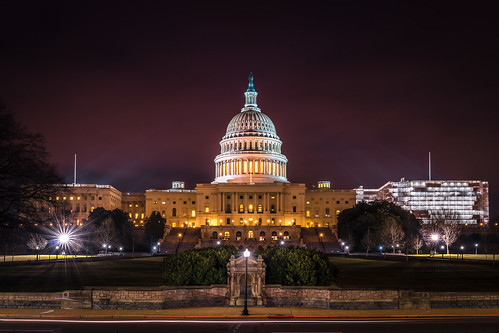 The US Capitol Lit Up, fortunately only by lights. But after the Trumpassault, we can never look at it in the same way.
(Image by John Brighenti)   Details   DMCA

Introduction: Fortunately the Trumpassault on the Capitol on Jan. 6, 2021 did not lead to its destruction. But it did lead to its desecration, both literally and figuratively. In my previous column in this space, I speculated that something like this mihgt happen. (So did many authorities, see, e.g., references in that previous column, but the threats and plans which had been made clear for many weeks on many sites on the Web, and even, metaphorically, by Trump, were not taken seriously.) This column examines the root, common underlayment, of the Trump/Trumpublican(C) false claim of election "fraud" which led directly to the Trumpassault on this past Wednesday. The text below is from a column of mine that was originally published at: zflash.com/articles/steve-jonas-1.

The Trumpassault and its Primary Cause.

In his first comment on Wednesday's Trump Insurrection and invasion of the incoming US Senate Majority Leader, "Chuck" Schumer, noted that on December 8, 1941, in asking the Congress for a Declaration of War on the Empire of Japan (yes, that's how going to war by the United States was done way back then), President Franklin Delano Roosevelt famously referred to December 7, 1941, the date of the Japanese surprise attack on the US naval base at Pearl Harbor on the island of Oahu in Hawaii, as "a day that shall live in infamy." Senator Schumer said that January 6, the date of Wednesday's Trump Insurrection and invasion of the Capitol of the United States, would join December 7 and September 11 as the third of such dates in the history of the United States.

As of this writing (Jan. 8, 2021) it is not known what if anything will happen to Trump during his last days in office. It is also not known what other outrages Trump may try to pull during this period. With the formal certification of the Biden victory in the Electoral College there is no legal path for Trump to remain in the Presidency. (After the bulk of this column was written, finally, under enormous pressure one can be sure, he finally did admit Biden won the electoral count and disingenuously pledged a peaceful transfer of power. Nevertheless, on the morning of January 8, the Democrats were giving serious consideration to initiating a necessarily rapid impeachment process.) But this is an angry, desperate man. He obviously wanted to remain in the presidency, likely both to try to fulfill his desire to become Dictator of the United States, and to try to avoid the massive load of federal, state, and local criminal charges as well as who knows how many civil suits arising from, if nothing else, his business practices.

So, as of January 6, at any rate, Trump was hoping, very unrealistically, that the assault on US bourgeois parliamentary democracy by his "sterling" legal team of Rudy Giuliani, et al from outside the Congress, and the Trump-wannabees Cruz and Hawley inside it, might work. At the same time, at some level he likely recognized that playing it by the rules would not work, especially after Puppet Pence decided to abandon that role and follow the law and the Constitution. And so, Trump turned to something that did work for him back in his business days, the use of force (although he never had tried anything on this scale). His Trump mob had been prepared since well before the election to believe that it would be "stolen" from him.

But there is an ideology that brings such a mob from all over the country and from a variety of socio-economic backgrounds to engage in such a violent assault on a prime symbol of U.S. bourgeois parliamentary democracy, that goes well beyond a fantasy "stolen election." (Members of the mob came from all over the country, some by air, spent money on hotels and etc. Those are not working-class folk, but rather from the petit bourgeois and professional classes.) That common ideological denominator is of course racism. As I have pointed out on numerous occasions in this space and others (and this is hardly an original thought) racism is the bedrock of "Trumpism." When he made his first trial run for the Republican nomination back to 2011-12, he made that very clear. Then it was obviously out-in-front in his 2016 campaign. Once becoming President he has made it very, very clear, with bugles rather than dog-whistles, that he is the Racist-in-Chief.

And so, when it comes down to attacking the results of the 2020 election to what does he turn? Why, as many observers have noted, race again. In the charges of "fraud," which even according to his former personal lawyer (I mean the former Attorney General, Bill Barr) and Chris Krebs, the director of the Cybersecurity and Infrastructure Security Agency [CISA], fired by Trump for speaking the truth) did not exist, Trump and his crack attorneys Giuliani, Sidney Powell, and Jenna Ellis, as has been frequently pointed out, always focused on the Intensively Black voting sectors in the "battleground" states, and only those sectors.

There was massive fraud in the votes coming from them, Trump and his "legal team" insisted. Over-and-over again. And somehow, they never identified any other voting districts where the alleged fraud occurred. This theme was picked up too by the Trump-wanna-be successors, Cruz and Hawley, and if anything amplified upon. Race is indeed the common denominator of the Grifter's Gripe. And so, what was the common denominator of the ideology of the Trump mob that assaulted the Capitol on Jan. 6, 2021? Golly gee. Just look at the pictures. Just look at their whiteness and the exquisite expression of "white privilege" that they somehow knew they would be granted from the Capitol police who hardly stood in their way going in and in certain instances actually gently assisted on their way out. (As many have noted [see "The Reid Out" broadcast on MSNBC that evening] just imagine what would have happened had this been a Black Lives Matter demonstration.) Just look at the Confederate battle flags that numbers of them were flying or had reproductions of pasted on their clothing. And then look at racism's evil twin, anti-Semitism that popped up in particularly vile ways --- that is in admiring references to Auschwitz.

Are there other elements that the mob-members have in common besides racism and a cult-like devotion to Der Fuerher? Of course, there are. Many of these folks are from the mass of white-left-behinds by the US industrial/commercial behemoth that in many of its sectors is globalized. And of course, Trump promised them much in the way of economic benefits in his 2016 campaign, none of which he has delivered on: e.g., coal production has actually gone down in West Virginia, due to market forces. So, Trump doesn't talk about "bringing back coal" anymore. Something has gone up there, that is drug abuse. But somehow Trump doesn't talk about that either. And so on and so forth. So, Trump makes sure, over-and-over again, with total disregard for the facts (but when did that little problem ever bother Trump and his ruling class supporters), that "the election was stolen" and wouldn't ya know it, it was the Blacks, with their white "liberal" and "Fake News" enablers, that did it.

Racism has worked for Trump since he first entered serious politics in 2011 (Click Here). It got him the Republican nomination and it got him elected President. Only because of his total mis-management of the Trumpidemic2020© it did not work to get him a second term. He seems to have played out his hand, this time. But he has activated his mob. And it is based on his old-reliable, racism. As is well-known, racism is the Original Sin of this country and its earlier formations. As I now say at the introduction to all my columns: "If this country does not kill racism, racism will kill this country."

That slaying of racism cannot be accomplished overnight, of course. But if a genuine start is not made on it, by the Biden Administration, then the Trumpublican© Party, led by the likes of Cruz and Hawley, is going to pick up that (new Confederate) flag and lead us right to the Second Civil War. If it is not finally attacked, with a broad frontal assault, to paraphrase Churchill, the Trumpassault on the Capitol will not be seen as the beginning of the end, but rather as the end of the beginning.

Steven Jonas, MD, MPH, MS is a Professor Emeritus of Preventive Medicine at StonyBrookMedicine (NY) and author/co-author/editor/co-editor of over 35 books. In addition to his position on OpEdNews as a "Trusted Author," he is a Senior Editor, (more...)
Related Topic(s): Assault; Race; Trump; Trump Attacks Joe Biden; Trump Blames The Media; Trump Cult; Trump Dangerous; Trump Fascist; Trump Impeachment; Trump Insurrection; (more...) Trump Plague; Trump Racism; Trump Racist; Trump The Fascist, Add Tags  (less...)
Add to My Group(s)
Go To Commenting
The views expressed herein are the sole responsibility of the author and do not necessarily reflect those of this website or its editors.