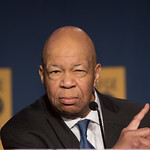 Elijah Cummings
(Image by AFGE)   Details   DMCA
Lawyers for President Donald Trump and the Trump Organization are suing Rep. Elijah Cummings, the chairman of the House Oversight and Government Reform Committee, to block a subpoena for years of financial records from several Trump entities. The lawyers say the subpoena for records from Trump's accounting firm, Mazars USA, “lacks any legitimate legislative purpose, is an abuse of power, and is just another example of overreach by the president's political opponents." “We will not allow congressional presidential harassment to go unanswered,” Jay Sekulow, one of Trump’s personal lawyers, said in a statement. "Harassment" is a phrase Trump often uses to attack his critics in Congress.
Read the rest of the story HERE: