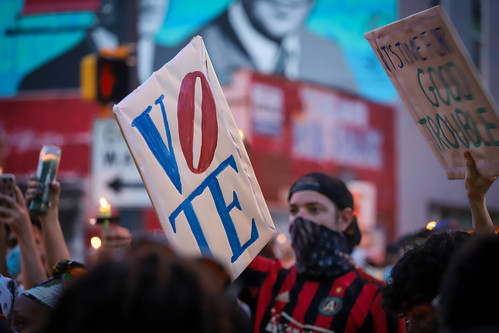 When the Civil Rights Act was gutted by the Supreme Court in 2013, with the elimination of the preclearance requirement, the late Georgia Representative John Lewis said, “We’ll have to start all over again,” referring to the bloodshed and indescribable human sacrifice in the sixties that gave birth to the Voting Rights Act in 1965.

One such effort, a march from Milwaukee to Washington, 750 miles, drew racist gunfire last August. According to the Philadelphia Inquirer, “They planned to arrive on the 57th anniversary of Martin Luther King Jr.'s “I Have a Dream Speech.” The trek was meant to pay homage to the 54-mile peaceful walk that King and others made from Montgomery to Selma, Alabama in 1965."

STAY IN THE KNOW
If you've enjoyed this, sign up for our daily or weekly newsletter to get lots of great progressive content.
Series: "rallies and demonstrations"