The Voting Rights Act of 1965 was a major milestone for civil rights activists, but in the 55 years since, African American voters have been systematically disenfranchised from the ballot box. 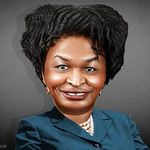 Now a new generation of African American women and men — including GA Dem Stacey Abrams, former First Lady Michelle Obama, and former AG Eric Holder —  are leading the way to make sure that US elections are fair.

None have endorsed a Democratic presidential candidate; the work each of them has been doing is larger than winning any particular election.

They would argue that an election cannot be fairly won if the process itself is unfair and leaves out large swaths of the population.

Perhaps nobody knows the impact of voter suppression and other dirty tricks as well as Stacey Abrams. She was one fair election away from becoming the first female African American governor