The primary in June, which had been canceled over concerns about the coronavirus, should still be held, with all qualifying candidates restored to the ballot, a federal judge ruled. 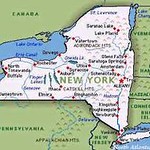 Even though he suspended his campaign, Mr. Sanders had repeatedly pleaded for his supporters to vote for him, arguing that the more delegates he could amass, the greater leverage he would have over policy discussions with Mr. Biden and the Democratic platform.

But progressives around New York also sounded the alarm that canceling the presidential primary could have an outsize impact on their turnout. The presence of Mr. Sanders, a galvanizing force for progressives around the country, on top of the ticket was likely to drive more turnout for down-ballot races, they said.