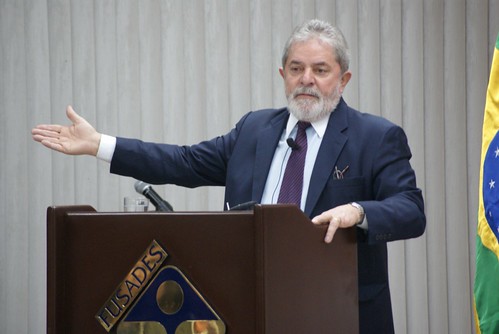 Luiz Ignacio Lula da Silva, Ex preisdente de Brasil
(Image by lexdjelectronic)   Details   DMCA
My imprisonment was the latest phase in a slow-motion coup designed to permanently marginalize progressive forces in Brazil. It is intended to prevent the Workers’ Party from again being elected to the presidency. With all the polls showing that I would easily win this October’s elections, Brazil’s extreme right wing is seeking to knock me out of the race. My conviction and imprisonment is based solely on the testimony of a witness whose own sentence was reduced in exchange for what he said against me. In other words, it was in his personal interest to tell the authorities what they wanted to hear.

Brazil’s conservatives have done much work to roll back the progress of our Workers’ Party governments, and they are determined to keep us from coming to office again in the near future. Their ally in this effort is JudgeSérgio Moro and his prosecutorial team,