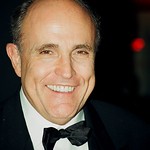 Rudy Giuliani
(Image by John Mathew Smith & celebrity-photos.com)   Details   DMCA
While on a mission to Ukraine to acquire information about the business dealings of Hunter Biden, Rudy Giuliani was kidnapped by a travelling Ukrainian circus, Giuliani confirmed on Tuesday. “It was the strangest thing,” he told reporters. “I was on a street corner talking to some people about the Bidens, and these guys came up to me and said, ‘Come with us.’ I thought they were taking me to a cable-news studio.” Where they were taking him, it turned out, was the Krychevsky Wonder Show, a popular family-owned circus that has been travelling around Ukraine since 1873. “We saw this guy acting entirely bizarre, and we decided we had to have him in our circus,” Oleh Krychevsky, its current proprietor, said. “It’s hard to find a sideshow attraction with that much potential.”
Read the rest of the story HERE: