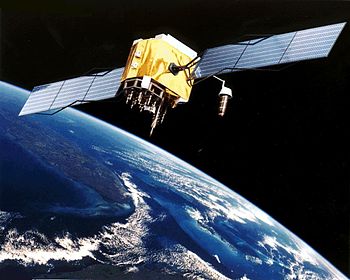 GPS Satellite NASA art-iif.
(Image by (From Wikimedia) NASA, Author: NASA)   Details   Source   DMCA
"Technology to clearly see something as small as a coffee mug — or smaller — should not be taken lightly. Little can be done to combat or hide from cameras virtually invisible from the ground. No one consents to being imaged from space -- no laws prevent your property from being captured by commercial satellites. When Trump tweeted an image of Iran’s Imam Khomeini Space Center in August, amateur satellite trackers were shocked by the image’s high resolution.  Not only did thesatellite’s size, location and orbit match the vantage point of the image, but only such a state-of-the-art satellite could possibly capture details like the clear Persian writing on the launchpad’s edge.  We are not ready for the ethical boundaries this invasion of privacy will cross."

Other Series: View All 211 Articles in "Democracy Crisis"

Other Series: View All 32 Articles in "Human Rights"

Other Series: View All 105 Articles in "Transformational era of information"