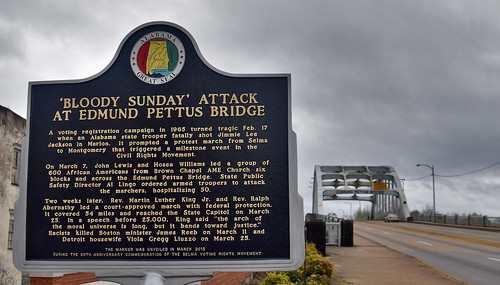 Today is the 56th anniversary of Bloody Sunday. On that day in 1965, “state troopers beat and tear-gassed hundreds of peaceful protestors crossing the Edmund Pettus Bridge in Selma, Alabama. The protestors were seeking justice and to ensure their right to vote would not be denied. At the head of the march were former Congressman John Lewis and Rev. Hosea Williams. As the troopers advanced with clubs raised, the group knelt in prayer. The images of protestors, bloody and bruised, flashing on television screens across the nation spurred Congress to pass, and President Johnson to sign into law, the 1965 Voting Rights Act.”

Other Series: View All 68 Articles in "activism in action"