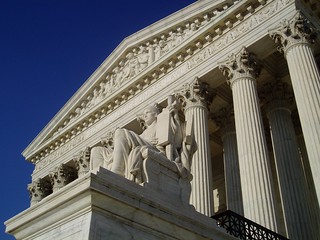 Supreme Court
(Image by ThatMattWade)   Details   DMCA
Since posting the piece here two days ago on "How Obama Can Break the Supreme Court Impasse," I've had two related adventures on the topic.

EXECUTING A PLAN ALREADY IN PLACE

The first was purely internal: a piece of detective work conducted in my own mind.

I imagine other people must have already thought of this, but it was only last night that it dawned on me what the implications are of how swiftly, after the death of Justice Scalia, Mitch McConnell announced the Republican refusal to consider any nominee President Obama could put forward.

Until last night, I'd just been struck, and offended, by how quickly McConnell politicized the death of Scalia--before the body was cold, as the saying goes. But then I had a realization: McConnell could act so swiftly only because he was executing a plan that had long been decided.

McConnell is not an impulsive man. This is not something he would have decided in the few hours after the Court vacancy opened up. The Republicans had foreseen such an eventuality, and had a plan in place to deal with it.

It's easy to see what would motivate the Republicans to make such a plan. With the conservatives controlling the Court with a 5-4 majority, then if any of the conservative five were to vacate his seat, the President would be able to switch control of the Court to the liberal side.

So as the Republicans saw that looming possibility, they must have decided in advance: "Whatever it takes to maintain control of the Court, we will do." Hence the need for a plan to prevent the president from filling the vacancy that might be created by the death of one of the right-wing justices.

How long was this plan in place? If Scalia had died in January of 2015, would this same plan have been put into effect? My guess is, yes: the Republicans would have had to skip some of their bogus justifications ("last year of his term"), but it has already become clear that genuine justifications are irrelevant to what they are doing.

Yet it is conceivable that the idea for this plan traces back to the very beginning of Obama's presidency. That's when the Republicans in Congress decided to make it their top priority to make this president fail. They might at the same time have decided: "If we ever get control of the Senate, we will just refuse to confirm anyone who would take away our control of the Court."

Meanwhile, while the Republicans were in the minority, it was their good fortune that the two seats that Obama got to fill were to replace retiring justices - Souter and Stevens - who already were liberal votes. So those nominations sailed through to confirmation.

It was their further good fortune that it was only after the Republicans had become the Senate majority that a seat opened up that could shift control of the Court.

And at that point, the plan - however long ago it had been formulated - became operative.

IS SUCH REFUSAL THE SENATE'S CONSTITUTIONAL PREROGATIVE?

The second adventure occurred among the comments my piece received on DailyKos.

Andy Schmookler, an award-winning author, political commentator, radio talk-show host, and teacher, was the Democratic nominee for Congress from Virginia's 6th District. His new book -- written to have an impact on the central political battle of our time -- is
Related Topic(s): Constitution The; Obstructionism; President Barack Obama POTUS; Supreme Court Chief Justice John Roberts; Supreme Court SCOTUS; Supreme Court SCOTUS, Add Tags
Add to My Group(s)
Go To Commenting
The views expressed herein are the sole responsibility of the author and do not necessarily reflect those of this website or its editors.