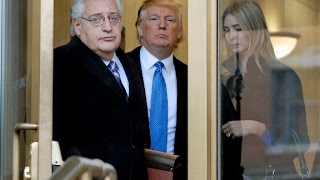 DONALD TRUMP has spat in my face.

Not only in my own face, but in the faces of at least half the Israeli population.

He has appointed a bankruptcy lawyer named David Friedman to the job of US ambassador in Israel.

This sounds like a bad joke. But it is brutal reality. It sets a precedent unknown in the annals of international diplomacy.

True, it is not the first time an American Jew has been appointed ambassador to Israel. There have been two or three, who could just as well have served as Israeli ambassadors to Washington. But they were far less opinionated than this specimen.

An ambassador serves as the eyes and ears of the home country in a foreign state. Among his tasks is providing his superiors in the foreign office with reliable, unbiased information, on which to base policy. The ideal ambassador is a cool observer, with no strong feelings towards the country of his mission, neither positive nor negative.

This description of a diplomat is the exact opposite of this particular individual.

It would have been far more reasonable to appoint David Friedman as Israeli ambassador to the United States. Unfortunately this post is already occupied - by another American Jew. Rumor has it that he was appointed by Netanyahu at the request of Sheldon Adelson, a Jewish casino magnate, who puts his money where his mouth is -- in the far-far-far Israeli right.

But even this person is a leftist compared to David Friedman.

The name, of course, is a joke in itself. Friede in German means peace, but this David is the opposite of a Man of Peace. The Biblical David, by the way, was a man of war through and through, and for this reason God decreed that only his son, Solomon, would build the First Temple.

SO WHO is this man of peace? Since the news of his coming appointment became known, the internet has been flooded with quotations from his sayings. All of them incredible, each one more than the last.

One thing stands out even on first reading: when this future US ambassador says "we," he means "we Israelis," "we true Israelis," "we Israeli patriots." The territory of Greater Israel, from the Mediterranean Sea to the Jordan river (at least) is "our country."

Friedman does not identify with all Israelis. He seems to think that most of us are blind, imbeciles, defeatists. or worse -- traitors. This would set a world record: most Israelis, it appears, are traitors.

Related Topic(s): Ambassador; David Friedman; Israel; Palestinian, Add Tags
Add to My Group(s)
Go To Commenting
The views expressed herein are the sole responsibility of the author and do not necessarily reflect those of this website or its editors.