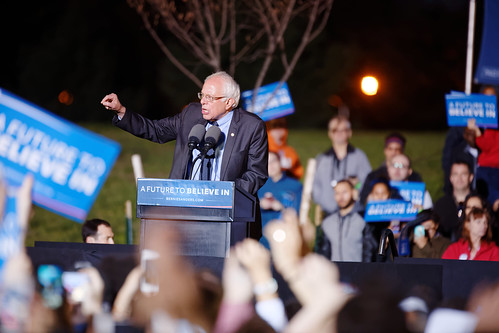 It's quite understandable that some might think this whole Democratic nomination thing was over long ago -- or at least should have been -- even though they're still counting June 7 California primary votes (Hillary Clinton's overall win is not in doubt, but Bernie Sanders has closed the gap, so there are delegates still being chosen). For one thing, a lot of mainstream media in the east pretty much checked out after Hillary Clinton's April 19th New York primary win. And in Washington, there's always been a Capitol Hill crowd that resented the very idea of anyone contesting Hillary Clinton for the nomination -- much less Sanders. But what really appears to have some of the opinion leaders flummoxed right now is the prospect that the upcoming Democratic Nominating Convention might not be another infomercial-like, public display of unity like the events of recent years. Could this be a year when delegates once again actually vote for the candidates they were selected to represent? And even debate the issues that brought them to Philadelphia?

For some Clinton-backers, the very idea may be something of an affront. After all, eight years ago, it was Clinton herself who made the motion that her erstwhile opponent, Barack Obama, be nominated by acclamation. Doesn't she then deserve the same in return? Certainly recent precedent is in her favor, since the last Democratic nominee with a less than 99 percent convention vote was Bill Clinton in his first run in 1992. Four years later he was unanimously renominated, which was not unusual for a sitting president. Then, in 2000, Vice President Al Gore became the first non-incumbent nominated unanimously, as none of Senator Bill Bradley's delegates actually voted for him (a few abstained). In 2004, the only one of the candidates who had contested the nomination with Senator John Kerry who actually received convention votes was Ohio Representative Dennis Kucinich -- and that was only about one percent.

For the last runner-up to even record a double digit vote, we have to go back to former (and future) California Governor Jerry Brown who drew 14 percent of the 1992 convention vote, with another seven percent going to Senator Paul Tsongas. 30 percent voted for Jesse Jackson in 1988, and 31 percent for Senator Gary Hart in 1984, when Jackson also received 12 percent. And that's how it used to be done -- if the voters selected you to go to a convention to represent a specific candidate, that's what you did.

Which makes for the better convention -- the new way or the old? Depends upon whether you're looking for decorum or debate.

A platform worth arguing about?

It seems that if there's anything even more unpopular among current Democratic party planners than non-unanimous nominations, it would be public displays of disunity on the issues. For years now, Democrats and Republicans alike have downplayed the importance of a platform. The argument first was that the convention shouldn't tie the candidate's hands. Which then developed into the idea that delegates shouldn't even disagree publicly (and might be ignored if they did, as happened during a 2012 Democratic Convention floor amendment voice vote). Here again, though, it wasn't always this way.

In the early part of the twentieth century, Democrats, who once considered debating the big issues of the day to be only a logical part of a national convention, held important convention debates regarding the League of Nations and the Ku Klux Klan Perhaps most notably, in 1948, Democrats began their long process of supplanting the party of Lincoln as the advocate of civil rights when the convention adopted a minority report calling for federal government guarantees of equal rights. They did their disagreeing in prime time, too, as a live audience estimated at 70 million heard then Minneapolis Mayor Hubert Humphrey call upon his party to "get out of the shadow of states' rights." Anti-Vietnam War delegates did not make out as well in 1968, when Humphrey stood on the opposite side as Vice President and presidential nominee. Nevertheless, it was a given that an issue of that magnitude would be debated at the convention.

For many of the conventions thereafter, the platform's significance was taken for granted -- if only perhaps rhetorically. Commitments to creating a full employment economy and a universal national health insurance system became routine, but then disappeared as the party moved toward candidate-oriented centrism. The most recent flurry of floor fights came at the end of Jackson's issue-oriented 1988 run.

Here again comes the question of decorum or debate: If your main thing is your candidate's supposed qualifications or symbolic value you may not be eager to entertain arguments on specific issues, but if you think it's all about your candidate's position on those issues, you obviously will be eager to have those discussions. This year there is little doubt that there will be quite a large group of delegates who are of the latter persuasion -- at least 1,800, it would appear. So unless the Clinton campaign should change stances it has taken in the drafting committee by the time the full platform committee meets, we may well see some of the day's biggest issues -- fracking, the Trans Pacific Partnership, Israeli West Bank settlements, a $15 minimum wage, a single payer health insurance system -- come up for debate at the highest level of the Democratic Party -- the nominating convention in Philadelphia -- just like they used to.

Related Topic(s): 2012; Change; Debate; Delegates; Democratic; Democrats; Economy; Fracking; Government; Issues; (more...) Media; Nomination; President; Primary, Add Tags  (less...)
Add to My Group(s)
Go To Commenting
The views expressed herein are the sole responsibility of the author and do not necessarily reflect those of this website or its editors.