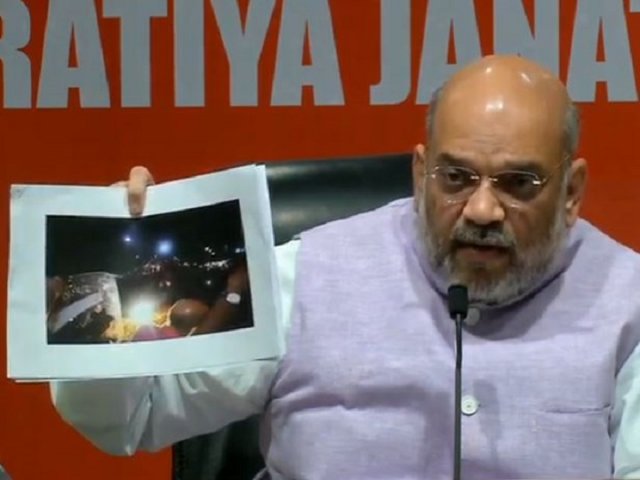 BJP president Amit Shah has left Mamata Banerjee and Trinamool Congress (TMC) nowhere to run, and if one may add also the biased Election Commission and Lutyens Media.

Mamata Banerjee has centred all her allegations around the alleged BJP workers' hands in dismantling the statue of Vidyasagar, a key figure in Bengal renaissance in the 19th century, in the Calcutta University on Tuesday. Amit Shah put forth a series of evidence, in the form of photographs, in a press conference today, which appear irrefutable.

Shah showed photographs of a locked main gate of Calcutta University; the one of BJP workers outside the gate; the image of Vidyasagar's statue not in open but two rooms inside the university; and the fact the time of incident was 7.30 in the evening. "How could we, outside the locked gate, be present and break a statute inside rooms of the university? Isn't it a fact that only TMC supporters were on the other side of the gate (inside university)", thundered Shah, pointing at the conspiracy of TMC itself.

Shah further refuted the allegation of BJP workers causing violence in West Bengal. Said Shah: "Didi is fighting only 42 seats. We are fighting all over India. Has news come from anywhere that BJP has indulged in violence? Has violence been reported from anywhere in India but in Mamata's Bengal? What proof do you need of the culture of violence under TMC rule."

Shah said Mamata Banerjee was rattled by the turnout of over two lakh voters in his rally in Bengal yesterday and not "an inch of space was visible in over seven kilometers of stretch." He also showed a photograph in which he is seen being shielded by paramilitary forces. "If these forces were not there, I wouldn't have been able to come out alive," said Shah.

Shah was particularly severe on Election Commission which he said has been "partisan" in favour of Mamata Banerjee. "There are any number of incidents, video recordings, of rigging in polls in Bengal. Media has reported it. After each of the six phases when violence has occurred in Bengal, our leaders have approached Election Commission and sought an action from them. Not once have they ordered a repoll anywhere," said Shah.

"Election Commission has been a mute spectator. Everywhere in the country history-sheeters are apprehended ahead of polls. Not a single one has been caught in West Bengal so far. I seriously question EC's neutrality in Bengal."

Shah also urged media to come out with their footage of his rally to nail the truth on Vidyasagar statue and other issues. He didn't want the rest of media to act like a particular TV channel that headlined its coverage with "Violence in Amit Shah's rally". Were we behind the violence, he questioned. He pointed out that no less 60 people have been killed in Bengal and most of them have been BJP workers.

Related Topic(s): Conspiracy; Media; Paramilitary; Renaissance; Violence, Add Tags
Add to My Group(s)
Go To Commenting
The views expressed herein are the sole responsibility of the author and do not necessarily reflect those of this website or its editors.