BLOGGED BY Brad Friedman ON 5/4/2008 11:54AM
GOP Polling Place Photo ID Restrictions: Keeping Vets (and So Many More) From Voting in America
Why Do Republicans Hate our Troops? And the U.S. Constitution? 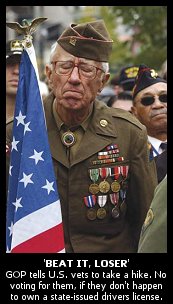 (Image by Unknown Owner)   Details   DMCA
As I've been trying to help people understand, this Indiana polling place Photo ID restriction law, as upheld last week by the Supreme Court, is so much worse than most folks realize right now.

It is, as previously predicted, already beginning to spread like wildfire to other states, such as Missouri, where the Republicans control both legislature and state house, and where even a few thousand legal Democratic votes, shaved cynically off of the results in places like the city of St. Louis next November, can be the difference between the state going "red" instead of "blue."

The following remarkable tale of a U.S. Army vet who has fought in three conflicts for our country, and who has won multiple medals for his service, including two bronze stars, purple heart, etc., who has been registered to vote since 1968, but who is now having a helluva time being able to cast a ballot in Indiana, will likely become all too typical now. The report comes from from the Nuvo weekly in the Hoosier state, and was sent in by BRAD BLOG reader "RC."

It is absolutely maddening, at least to those of us who give a damn about American values, such as democracy, the U.S. Constitution, patriotism, love of country, etc., so it may mean little to the vast majority of Republicans out there today. Please, at least, read the lede to the story below and --- if you're a Republican who supports this anti-American bullshit --- please let us know, in comments, why why this sort of treatment of our troops is okay with you. All of this, despite Indiana's own admission during the SCOTUS hearing, that there has never been, in the state's entire history, a single known instance of polling place voter impersonation fraud of the type this law is supposedly meant to keep from happening...

Russell Baughman, 61, has fought in three conflicts as a part of the United States Army. He was on the front lines in Vietnam in March of 1967 during a battle that has since become known as "the bloodiest week." He was sent to Panama shortly after the 1989 U.S. invasion as part of a security maintenance force. And he spent six months in the deserts of Saudi Arabia and Kuwait during the Gulf War in the early '90s.

His military discharge papers feature a paragraph's worth of honors and awards, like the national defense service medal, the Vietnam service medal with two bronze service stars, the combat/infantry badge and a purple heart for being wounded during combat.

So when Baughman arrived at his polling place at precinct 52 in Lawrence March 11 for the special election, he wasn't expecting to have a problem voting in the country he had defended.

But since Indiana passed its new Voter ID law, which requires every voter to have a valid, government-issued photo ID, Baughman's identification was no longer good enough.

He had with him his expired driver's license (he rides a bicycle), his Department of Veterans Affairs card (featuring his purple heart endorsement) and, of all things, his voter's registration card.

"I've been on the voting rolls since 1968," Baughman said, "and all of a sudden they expect my identity to change. There was no change."

Baughman was offered a provisional ballot. The print was so small that the polling officials had to fetch a magnifying glass. After filling out a provisional ballot, the voter has 10 days to prove his or her identity at their county clerk's office. During this time the voter must come up with the appropriate identification.

He had been to the license branch several times, trying to attain a new photo ID card, and had been denied. In order to get a new photo ID, one must have one form of primary identification: an original birth certificate or naturalization card, a U.S. Veterans Universal Access Identification card, a current military ID card or a valid U.S. passport.

Please note, the rest of the piece outlines the "Catch-22" that voters such as Baughman face in trying to get his state-issued Photo ID as now needed if one wishes to cast their legal vote in Indiana. "[T]o get a birth certificate or a driver's license or a passport," as required to get that "free" ID frome the state, the story notes, "you have to have valid ID - the very thing you're trying to obtain."

This Anti-American GOP garbage, combined with, likely, millions of previously-registered voters who will show up on Election Day, only to find they are not on the voting rolls at all (given the caging and/or recent oversight-less corporate privatization of such rolls) is going to be so much worse in November than I can possibly get across to you here.

Please join me in helping folks understand what's going on here. This is not about "voter fraud," this is about nothing more than voter suppression. Period. And it's going to be a frickin' nightmare this fall...

Avid reader, jazz musician, philosopher, chef, stone mason, carpenter, writer, painter, poet,humanist, teacher, holistic ethicist who believes consciousness and love pervade the universe, except among self-obsessed humans. I perceive the (more...)
Related Topic(s): Democracy; Fraud; Republican; Veterans; Voting Integrity, Add Tags
Add to My Group(s)
Go To Commenting
The views expressed herein are the sole responsibility of the author and do not necessarily reflect those of this website or its editors.

The premeditated murder of the United States of America