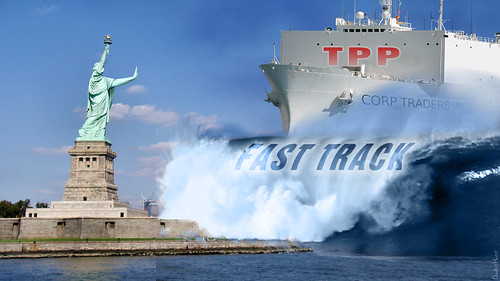 Liberty Facing Tidal Wave of Trade Aggreements
(Image by DonkeyHotey)   Details   DMCA
>
You must see EXPOSE THE TPP. ORG
If you have no idea what the TPP or Trans Pacific Partnership is you need to read this! The TPP has been working behind closed doors secretively negotiating this Treaty for at least 7 years. It involves the USA, Australia, Brunei, Japan, Malaysia, Mexico, New Zealand, Peru, Singapore and Vietnam, with Vietnam being the biggest benefactor. It is 30 Chapters long yet only 6 chapters deal with Traditional Trade Issues. It gives definite advantage to foreign companies over local American owned companies who would be able to sue the United States in a Secret Tribunal made up of only 3 judges for huge amounts of money which will be paid by the American Taxpayers. There is no appeals process. It allows Corporations to sneak around our courts and laws and sue because they don't like our laws. Some of the examples are, Chevron trying to evade liability for its Ecuadorian toxic contamination, Phillip Morris attacking Australia's cigarette labeling policies, Eli Lilly attacking Canada's drug patent policy, European firms attacking Egypt's post-revolution minimum wage increase and South Africa's post-apartheid affirmative action policy. These are a few of the examples of $38 billion awaiting judgement right now!
Among the claims foreign firms can make under this system is that a change in government policy undermined their "expected future profits." It does not matter if the change in law came in response to a new financial crisis or health discovery or environmental catastrophe or that it applies to domestic and foreign firms alike - foreign firms can demand compensation from US taxpayers. Claiming such radical privileges, foreign corporations have launched investor-state cases against a broad array of environmental, energy, consumer health, toxics, water, mining and other non-trade domestic policies that they allege undermine their "expected future profits."
Nearly five million American manufacturing jobs -- one out of every four -- have been lost since implementation of the North American Free Trade Agreement (NAFTA) and the World Trade Organization (WTO). Since NAFTA, over 60,000 American manufacturing facilities have closed. The TPP would replicate and expand on the NAFTA model.
TPP includes extreme foreign investor privileges that help corporations offshore more U.S. jobs to low-wage countries. These NAFTA-style terms provide special benefits to firms that relocate abroad and eliminate many of the usual risks that make firms think twice about moving to low-wage countries.
Under the NAFTA model, U.S. manufacturing imports have soared while growth of U.S. manufacturing exports has slowed.
TPP includes Vietnam, a new favorite for corporations' job offshoring, because wages there are even lower than China.
Already, the growth of the U.S. trade deficit with China, since China entered the WTO in 2001, has had a devastating effect on U.S. workers and the U.S. economy. Between 2001 and 2011, 2.7 million U.S. jobs were lost or displaced.
Devastation of U.S. manufacturing drives down wages, erodes the tax base and heightens inequality. Despite major gains in American worker productivity, real median wages hover at 1979 levels. Government data shows that two out of every five displaced manufacturing workers who were rehired in 2012 experienced wage reductions of more than 20 percent. With the loss of manufacturing, tax revenue that could have funded social services or local infrastructure projects has declined, while displaced workers have turned to ever shrinking welfare. This resulted in local governments virtual collapse in areas hardest hit.
The TPP would also require less food labeling and imports of food that does not meet US Food Safety Standards.
From the workers who manufacture the materials to upgrade America's bridges and highways to those who build the cars driven by our government officials, Buy American creates U.S. jobs by recycling U.S. tax dollars back into our economy. Buy American policies require that most federal government purchases of goods go to American firms, unless a product is not made here or the U.S. product is much more expensive. Buy American is supported by four out of five U.S. voters -- Republicans, Democrats and independents alike.
But Buy American would be gutted, and American jobs lost, under TPP rules requiring "national treatment" in government procurement. To implement this TPP requirement, the United States would agree to waive "Buy American" procurement policies for all firms operating in TPP countries, offshoring our tax dollars to create jobs abroad.
Some corporate TPP proponents argue that these rules would be good for the United States because they would allow U.S. firms to bid on procurement contracts in TPP countries on equal footing. The notion that this is a good trade-off for waiving Buy American preferences on U.S. procurement is ridiculous. The U.S. federal procurement market is larger than the combined national procurement markets of all other TPP negotiating parties. Even more, U.S. firms already have equal procurement access in most TPP countries under existing deals. Counting only TPP countries in which this is not true, the U.S. federal procurement market is more than 14 times the size of the total "new" TPP procurement market.
Most of what I have printed here is directly cut and pasted from exposethetpp.org. There is so much bad information here that it would be impossible for me to print it all on this short story and most unlikely that you to take the time to read it. We must write our Representatives or call and let them know that we oppose this new trade policy. This is by and for those who are already paying our government officials to do their bidding. It will cause a projected loss of at least 771,000 jobs but I doubt that anyone knows the exact amount or would even bother to tell us the truth. Remember when the Clintons established NAFTA, this is super NAFTA and it is not a good thing for the citizens of our country. It is designed to give even more authority to the wealthy corporations. Please take a look at EXPOSETHETPP.ORG for a better understanding of what it entails. Michael