"If the freedom of speech be taken away, then dumb and silent we may be led, like sheep to the slaughter." -- George Washington 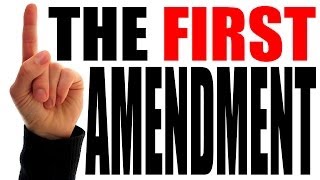 Living in a representative republic means that each person has the right to take a stand for what they think is right, whether that means marching outside the halls of government, wearing clothing with provocative statements, or simply holding up a sign.

That's what the First Amendment is supposed to be about.

Yet through a series of carefully crafted legislative steps and politically expedient court rulings, government officials have managed to disembowel this fundamental freedom, rendering it with little more meaning than the right to file a lawsuit against government officials.

In the process, government officials have succeeded in insulating themselves from their constituents, making it increasingly difficult for average Americans to make themselves seen or heard by those who most need to hear what "we the people" have to say.

Indeed, President Trump -- always keen to exercise his free speech rights to sound off freely on any topic that strikes his fancy -- has not been as eager to protect the First Amendment rights of his fellow citizens to speak freely, assemble, protest and petition one's government officials for a redress of grievances.

Not that long ago, in fact, Trump suggested that the act of protesting should be illegal.

The president has also suggested demonstrators should lose their jobs or be met with violence for speaking out.

Mind you, this is the man who took an oath of office to uphold and defend the Constitution.

Perhaps someone should have made sure Trump had actually read the Constitution first.

Most recently, the Trump Administration proposed rules that would crack down on protests in front of the White House and on the National Mall.

According to the Philadelphia Inquirer, "The rules would restrict gatherings that now take place on a 25-foot-wide sidewalk in front of the White House to just a five-foot sliver, severely limiting crowds. The NPS [National Park Service] also threatens to hit political protesters on the National Mall with large security and cleanup fees that historically have been waived for such gatherings, and it wants to make it easier to reject a spontaneous protest of the type that might occur, say, if Trump fires special counsel Robert Mueller."

Imagine if the hundreds of thousands of participants in the 1963 March on Washington for Jobs and Freedom, which culminated with Martin Luther King, Jr.'s "I Have a Dream" speech at the Lincoln Memorial, had been forced into free speech zones or required to pay for the "privilege" of protest.

There likely would not have been a 1964 Civil Rights Act.

Related Topic(s): America; America Freedom To Fascism; American Facism; Freedoms; Protester; Revolt, Add Tags
Add to My Group(s)
Go To Commenting
The views expressed herein are the sole responsibility of the author and do not necessarily reflect those of this website or its editors.