Is humanity forming en-masse? for lo, tyrants tremble, crowns grow dim,
The earth, restive, confronts a new era, perhaps a general divine war,
No one knows what will happen next, such portents fill the days and
nights;

Years prophetical! the space ahead as I walk, as I vainly try to
pierce it, is full of phantoms,

Unborn deeds, things soon to be, project their shapes around me,
This incredible rush and heat, this strange ecstatic fever of dreams
O years! -- Years of the Modern- Walt Whitman

The great American poet Walt Whitman wrote these words in 1859. Whitman was trying to peer into a future of uncertainty. He was sure the future would be bleak. He had visions of phantoms. Maybe he saw the 600,000 souls who would lose their lives in the next six years. Whitman had captured the mood of a country entering the Fourth Turning. He didn't know what would happen, but he felt the beat of war drums in the distance. Whitman did not have the benefit of historical perspective that we have today.

There have been three Fourth Turnings in American History. The American Revolution Fourth Turning ended in 1794 with the Crisis mood easing with the presidency of George Washington. Whitman didn't realize that, 64 years after the previous Fourth Turning, the mood of the country was ripe for revolution and the sweeping away of the old order. When the stock market crashed in 1929, 64 years after the exhausting conclusion to the Civil War Fourth Turning, Americans didn't realize the generational constellation was propelling them toward a new social order and a horrific world war. It is now 66 years since the conclusion of the Depression/WWII Fourth Turning. All indications are that the current Fourth Turning began in the 2007-2009, with the collapse of the housing market and the ensuing financial system implosion.

I find myself vainly trying to pierce the veil of events yet to be. The future is filled with haunting phantoms of unborn deeds which could lead to renewed glory, untold death and destruction, or possibly the end of the great American experiment. Walt Whitman captured the change of mood in the country with his poem. History books are filled with dates and descriptions of events, battles, speeches and assassinations. What most people don't understand is Fourth Turnings aren't about events, but about the citizens' reaction to the events. 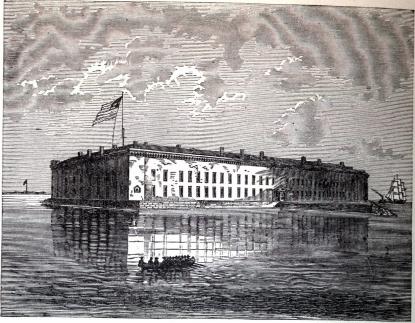 One hundred and fifty years ago this week Fort Sumter was bombarded by upstart revolutionaries attempting to break away from an overbearing Federal government based in Washington D.C. Exactly four years later the butchery and death concluded dramatically with Robert E. Lee surrendering to Ulysses S. Grant at Appomattox and the assassination of Abraham Lincoln by John Wilkes Booth at Ford's Theater. For the next four years we will celebrate the 150th anniversary of various battles that marked the Civil War. What people will not consider are the similarities between that tumultuous period in our history and the period we are in today. Fourth Turnings are marked by different events but the same mood of upheaval, anger and fury.

As Strauss & Howe note in their book, the morphology of a Fourth Turning follows a predictable pattern:

This Crisis morphology occurs over the span of one turning, which (except for the U.S. Civil War) means that around fifteen to twenty-five years elapse between the catalyst and the resolution. The regeneracy usually occurs one to five years after the era begins, the climax one to five years before it ends.

The catalysts are relatively easy to identify, but the point of regeneracy is more subtle and harder to grasp.

"Like nature, history is full of processes that cannot happen in reverse. Just as the laws of entropy do not allow a bird to fly backward, or droplets to regroup at the top of a waterfall, history has no rewind button. Like the seasons of nature, it moves only forward. Saecular entropy cannot be reversed. An Unraveling cannot lead back to an Awakening, or forward to a High, without a Crisis in between. The spirit of America comes once a saeculum, only through what the ancients called ekpyrosis, nature's fiery moment of death and discontinuity. History's periodic eras of Crisis combust the old social order and give birth to a new." -- Strauss & Howe -- The Fourth Turning James Quinn is a senior director of strategic planning for a major university. James has held financial positions with a retailer, homebuilder and university in his 22-year career. Those positions included treasurer, controller, and head of (more...)
Related Topic(s): Banks; Crisis; Depression; Economic; Economy; Future; Government; Money; Money; Oil; (more...) Oil; People; People; Power; Revolution, Add Tags  (less...)
Add to My Group(s)
Go To Commenting
The views expressed herein are the sole responsibility of the author and do not necessarily reflect those of this website or its editors.