"Men, it has been well said, think in herds; it will be seen that they go mad in herds, while they only recover their senses slowly, and one by one." Charles Mackay -Extraordinary Popular Delusions and the Madness of Crowds 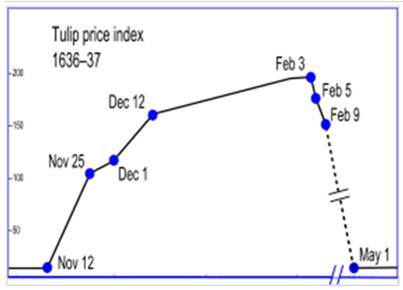 The American public thinks they are rugged individualists, who come to conclusions based upon sound reason and a rational thought process. The truth is that the vast majority of Americans act like a herd of cattle or ahorde of lemmings. Throughout history there have been many instances of mass delusion. They include the South Sea Company bubble, Mississippi Company bubble, Dutch Tulip bubble, and Salem witch trials. It appears that mass delusion hasreplaced baseball asthe nationalpast-timein America. In the space of the last 15 years the American public have fallen for the three whopper delusions:

BillBonner and Lila Rajiva ponder why people have always acted in a herd like manner in their outstanding book Mobs, Messiahs and Markets:

"Of course, we doubt if many public prescriptions are really intended to solve problems. People certainly believe they are when they propose them. But, like so much of what goes on in a public spectacle, its favorite slogans, too, are delusional more in the nature of placebos than propositions. People repeat them like Hail Marys because it makes them feel better. Most of our beliefs about the economy and everything else are of this nature. They are forms of self medication, superstitious lip service we pay to the powers of the dark, like touching wood".or throwing salt over your shoulder. "Stocks for the long run," "Globalization is good." We repeat slogans to ourselves, because everyone else does. It is not so much bad luck we want to avoid as being on our own. Why it is that losing your life savings should be less painful if you have lost it in the company of one million other losers, we don't know. But mankind is first of all a herd animal and fears nothing more than not being part of the herd."

The book Stocks for the Long Run was written by Jeremy Siegel in the mid-1990"˛s. The premise is that if you just buy and hold stocks over a 20 to 30 year period, you will always make money. This was exactly what the Wall Street witch doctors ordered. They pounded this message into the brains of every Americanincessantly in their advertising campaigns, literature and propaganda. It became an unquestioned truth. Just one problem. It isn't the truth. Valuations matter. The Dow Jones was at the same level in 1982 as it was in 1966. On an inflation adjusted basis, the Dow did not get back to the 1966 level until 1990. That is 24 years of no return in the stock market. The American public ignored the true facts and piled into equities during the late 1990s. The result was one of the greatest examples of mass delusion in history. The internet bubble drove the NASDAQ market to a peak of 5,048 in March 2000. Today it sits at 2,180. Ten years after the bubble burst, the NASDAQ is still down 57% from its peak.

Delusional Americans all over the country believed in the new internet paradigm. Fools thought "bricks and mortar" retailers were dead. Morons quit their jobs so they could get rich day trading. Wall Street hucksters took advantage of this hysteria by attaching .COM to every ridiculous IPO they shilled to the American public. Wall Street knew these companies were pieces of crap, but they churned out the IPOs as quickly as possible while the getting was good. The Wall Street oligarchs made billions and the delusional American public got screwed. You would think that average Americans would have learned their lesson after this experience. Theydid not. They continued to buy into the Wall Street lies about stocks being a sure pathto riches. The fact is that the S&P 500 is currently at the same level it was in March 1998. On an inflation adjusted basis, it is 25% below the level of 1998. You don't hear this information on CNBC because the oligarchs that control the media need the delusion to continue in order to harvest more riches from the ignorant masses.

"The continuing shortages of housing inventory are driving the price gains. There is no evidence of bubbles popping." David Lereah Chief Economist for National Association of Realtors 2005

"We've never had a decline in house prices on a nationwide basis. So, what I think what is more likely is that house prices will slow, maybe stabilize, might slow consumption spending a bit. I don't think it's gonna drive the economy too far from its full employment path, though." Ben Bernanke 2005

"House prices have risen by nearly 25 percent over the past two years. Although speculative activity has increased in some areas, at a national level these price increases largely reflect strong economic fundamentals." - Ben Bernanke 2005

Why was it that two supposedly brilliant, highly trained economists, with countless degrees and high payingpositions could be so very wrong? Were they just mistaken or were they purposefully encouraging a national delusion? With the bursting of the internet bubble in 2000 2002, Americans immediately proceeded to the next bubble. Alan Greenspan was an almost God like figure in the early 2000s. He had "saved" the economy countless times during his 15 year reign of terror at theFederal Reserve. When he spoke, the American people listened. After the internet bubble and 9/11, he proceeded to reduce interest rates to 1% for an extended period of time. He then gave the all clear sign to Americans to take out adjustable rate mortgages. Lastly, Mr. Free Markets decided that banks and mortgage brokers could police themselves. The result was the greatest housing bubble in US history and a near collapse of the worldwide financial system.

Saneeconomists like Robert Shiller saw it for what it was. Hecalmly pointed out that home prices had pretty much tracked inflation for over 100 years. A 100% increase in home prices over the course of 3 years wasirrationally exuberant. He was scorned and ridiculed by thedelusion propagators at the NAR, the cheerleaders on CNBC,the Wall Street money changers, the Federal Reserve stuffed suits, and the corrupt politicians in Washington DC. The usual drivel about positive demographics,low interest rates, strong income growth, and limited land to develop were spewed out by the corporate media complex. The beneficiaries of this mass delusion were the Wall Street banks that created mortgage products and derivatives faster than Obamaspreads our wealth around.

James Quinn is a senior director of strategic planning for a major university. James has held financial positions with a retailer, homebuilder and university in his 22-year career. Those positions included treasurer, controller, and head of (more...)
Related Topic(s): American Capitalism; American Crossroads; American Enterprise Institute; American Exceptionalism; American Facism; American Foreign Policy; American Hypocrisy; American Idol; American Recovery And Reinvestment Bill Of 2009; American Recovery And Reinvestment Plan; (more...) Banks; Delusion; Delusion; Fear; Ignorance; Jobs; Trade, Add Tags  (less...)
Add to My Group(s)
Go To Commenting
The views expressed herein are the sole responsibility of the author and do not necessarily reflect those of this website or its editors.

"Wonderful work! An insightful, integrative adventure into what makes humans flourish. Rob Kall shows us that we know how to do this, that most of human history was about connection and that there are ways to make it happen again. He offers real solutions and practical suggestions for taking back the world for community, connection and well-beingÂ—away from hierarchy, exclusion, and destruction. A new handbook for the necessary revolution!"