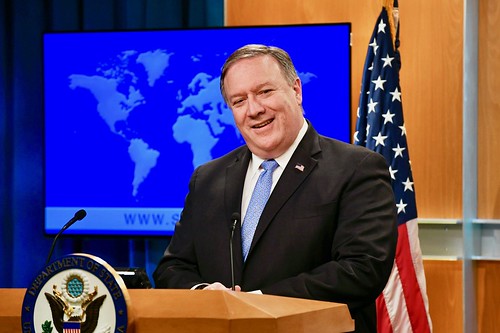 The United States has finally convinced India to sign their third and final foundational agreement called BECA (Basic Exchange and Cooperation Agreement for Geospatial Cooperation), which is being touted as the pact that will deepen the "cooperation" between the armed forces of the two countries.

The Times of India quotes Mike Pompeo as saying, "Today is a great opportunity for two great democracies to grow closer. We've a lot to discuss today--to cooperate amid pandemic, to confront Chinese Communist party's threats to security & freedom, to promote peace & stability in the region."

"We've strengthened our defense & security partnership especially over past year during which we advanced our regional security & information sharing. Our cooperation meets the challenges of the day & principles of a free and open Indo-Pacific," said Mark Esper.

"We are happy that we've completed the BECA , which will open new avenues in the information sharing. We are eager to discuss further issues with US," Rajnath Singh said.

However, according to Pravin Sawhney, a former Indian Army official and author of several books on modern warfare, with BECA the Americans will be able to control India's strategic assets including cruise and ballistic missiles once these agreements cumulatively come into force.

"India is to sign the Basic Exchange & Cooperation Agreement with the US to use its geo-spatial maps for buying armed MQ-9B drones. The US can now theoretically control the command & control systems of our ballistic & cruise missiles with its cyber capability as part of sensor to shooter loops!" Sawney tells Sputnik.

Pravin Sawhney says with BECA signing, India becomes de facto junior military partner of America. "Unlike other military allies, America need not have any liability or responsibility for Indian wars." He believes that BECA will not help India's defense at all.

The signing of this Basic Exchange and Cooperation Agreement (BECA) for the co-sharing of geo-spatial data will further firm up India's bid to acquire armed drones that use location-sensitive information for targeted strikes on enemies. This agreement will mark the final one of three military-communication foundational agreements between India and the US.

With the two previously signed military-communication deals - Logistics Exchange Memorandum of Agreement (LEMOA) and Communications Compatibility and Security Agreement (COMCASA) - the countries are allowed to use each other's designated military facilities for re-fueling and replenishment, and share important military information from the Indo-Pacific region.

Without elaborating on the details about a potential threat to India's strategic missile system, citing "national security issues", Sawney further hints at disruptive technologies defined by the US administration.

"The US Department of Defense has listed 'network communications' as one of 13 disruptive technologies to be acquired. Why? Because there's a need for intelligent & autonomous networks - with our own data & computing - which have minimal cyber dangers," Sawney emphasizes.

India is expected to purchase 30 General Atomic MQ-9A Reaper drones from the US for approximately $3 billion and use them in the border region with China as well as strategic waterways, defense sources said earlier this month.

While it has been officially claimed that these agreements may fortify India in checking Chinese expansionism, for instance, it will be a highly unlikely scenario of American forces deploying with Indian forces in a conflict situation, says Sarosh Bana of National Herald India, adding: Binding Indian forces to US codes and operating procedures is hence believed to be unnecessary, when India can well have its own speech secrecy and communication and data-transfer equipment. There is also the view that such accords can heighten India's dependence on the US by constraining it within legal obligations like end-use restrictions and bans on modifications.

Another anxiety is that such agreements often benefit the US far more than its partner countries. Amid border tensions between India and China, a fully armed US Navy long-range anti-submarine warfare and maritime surveillance aircraft, P-8 Poseidon, recently made an unprecedented landing at India's strategic tri-services command base in Andaman and Nicobar (A&N) Islands for a first time, refueling there. The refueling and victualising was carried out under LEMOA.